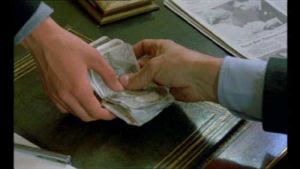 L'Argent was the last film made by the famous French director Robert Bresson. Bresson was a highly individualistic director who drew deeply upon both his Catholic faith and his experience as a prisoner of war in world war two. He was conceptually innovative: he used his actors or models as blank sheets upon which the mind of the viewer and the director imprinted images. Consequently a Bresson film is difficult to approach because the actors don't seem at times to be acting, but merely saying or speaking the lines. Their faces become enhanced with emotion but they are not themselves the providers of emotion. Bresson believed that actors can get in the way of their characters- he endeavoured not to allow that to happen in his film. He was also a film maker who refused to provide explanation- his films move swiftly along a set of sentences, and then this happened, and then this happened, and then this happened. He was an economist of the screen and consequently when you see a Bresson film, it is your mind that fills in much of the detail and the psychological realism behind the story.

Nowhere is this more true than in L'Argent. L'Argent was one of Bresson's more difficult and interesting films. Even by his standards the motivations which lead the leading character, Yvon, down to committing a horrific mass murder are opaque and hard to understand. The basic story was taken from a Tolstoy short story- The Forged Coupon- and concerns a man who is prosecuted for a crime that he did not commit. He ends up handing over fake money to the owner of a cafe, the police investigate him as a distributor of counterfeit notes and because the store owner that gave him the notes commits perjury, Yvon ends up in jail. Various other things follow as well from that moment. The store owner's assistant becomes a criminal as well having seen that criminality forms the basis for such a respectable bourgeois business and the original criminals, the young counterfeiters, escape without a bruise to their reputations. But the story in its way is insignificant besides the real drama which is interior to the characters.

Bresson's camera never takes you into places that you cannot see. He never exposes the motivation of his characters and yet you can at times get something of a sense of it through comparison and thought. Through analysing the action, contemplating the play of images upon the screen, you can see some kind of sense emerging. In that way, Bresson's camera manages to tell you less and more about his characters- less obviously but more implicitly. L'Argent is a film about guilt indeed- and the bills of paper are the inspiration for the evil acts that take place. But Bresson undermines his own McGuffin, he teaches us in this film that crime proceeds not from an act of want but from an act of will. Various of the criminals, including Yvon, that we see populate the screen have moments of desperation where their crimes are motivated by 'l'argent' but ultimately the greatest crimes are committed out of a vicarious and Nietzschean sense of will. Bresson was fascinated by the whole idea, explored by Dostoevsky of crime as a willed act, he remade in the 1960s the Russian master's novel Crime and Punishment as Pickpocket. L'Argent picks up on that theme of willed crime to a greater extent than its deceptive title might warrant.

Yvon may be propelled into crime by the unjust episode involving money- but it is clear to Bresson the Christian and to his audience that Yvon should resign himself to the event and rebuild his life. He doesn't. We know that Yvon's wife thinks that way, she wants him to explain himself and the reasons why things have gone wrong to his firm. Yvon's pagan sense of pride and manliness couldn't cope with such an explanation and in a terse one liner (so typical of the film) he turns down that option. Rather he goes into jail as the accessory to another crime, the story continues with Yvon continuing in his search to reemerge as a civilised man, to reshape the world by his will and undo the past injustice. His first effort, to use contacts in the criminal world to make money, fails. He is offered redemption again through the agency of a family that he lives with, but again he wants to will the act that will emancipate him. He steals and asks right at the end of the film, where is the money. The point is that Yvon never ceases to try and will the money's existence- the forged note has taken away his respectability- and he tries to recreate that respectability through remaking the world and not accepting it as it is.

There is an undoubted pessimism to this film. Contact with the modern world through money is shown as an unambiguous ill. Bresson leaves us in no doubt that it is the Marian dedication of an old woman on a farm who works for nothing that we should admire. She is connected to rural life and sacrafice in a way that none of the other characters are. She does not will but merely accepts her place in the God's scheme and his providential and unjustified pattern of existance. If there is a mirror text to L'Argent, then it is the Book of Job. Suffering comes through the very nature of living in a fallen world, through the fact that Satan holds dominion down here and inhabits the specie that we pass between each other. One strategy is to attempt to will onesself out of that situation, a strategy that in Bresson's terms leads to spiritual suicide. Another is to merely accept the grinding injustice and terror of life- to live through it, placing onesself always upon another cross, always in the position of Christ before Pilate.

For this is a work that is deeply anti-establishment and quietist. The French authorities are never shown as anything other than ceremonially dressed incompetents. As in Le Procès de Jeanne d'Arc, the judges of the case are judged and found guilty in Bresson. In the first trial, they manage to convict Yvon of a crime he never committed and hand down a harsh sentence. During the second trial, they convict Lucien, the shop assistant turned idealistic burglar, of thefts that he has committed. But Lucien commits those thefts to reveal the pomposity of the system and to give to charity. His act is an act of will and spiritual pride- but in rebuking him for it the judges merely reveal their inability to see further than their own natures. One thinks of Proust's story about the dinner party where the guests demurely tell each other how much they disagree with anarchism, whilst they each earn over 100,000 francs a person. So with Bresson attacking the system may be ridiculous, but defending it is worse.

Getting to the bottom of this complex and interesting story is a never ending journey. Bresson made his films in the way that he did to reflect the fact that life itself is something which you cannot get to the bottom of with a glib phrase from a superstar. He wanted his audiences to look deeply into the midst of his films and notice the subtle economy of his script, to take every line, every action and consider it as a semiotic revelation from the soul. When Bresson shows a car chase, he shows the foot going down on the accelerator, the policeman's hand on the steering wheel, cuts between them and that is it. When he shows a spiritual drama he leaves his viewer with the opportunity to try and wrestle with the issues provoked by his intelligent and economic direction. Ultimately just as the recitation of a life-story is easy, so is the recitation of the script of this film, but as with a life-story it is everything beyond and above the obvious facts that is hard to ascertain. For Bresson film was meant to reflect reality and reality was hard.

L'Argent therefore has like many Bresson films a double mission. In both senses it incarnates a sceptical Catholicism. Bresson wanted to remind us that telling stories was the easy part of life, working out what they meant and where each of the characters stood was harder and at the centre of that question for him lay the omnipotent deity. If Bresson's tactic was to evoke the mystery of life, then his subject in L'Argent is bad luck and its effects. Luck is symbolised through money. Machiavelli told us that we had to master or even rape fortune in order to have success. Bresson tells us that that option does not exist. Yvon tries to control his fate, he fails. Lucien tries to rescue mankind, he fails. The beneficiaries of the system, kids who have rich parents, judges who have red robes, always win. The point though is as the old woman does to struggle on, to exist and to make a sacrifice of your own ego in the service of devotion.

Bresson's film has often been called pessimistic. It isn't. Bresson himself said that L'Argent was his most lucid statement- it is and it is one of the most lucid statements of a quietist faith that I have seen on screen or anywhere else. Whether Bresson was right or not is of course another issue- but you cannot critique the power with which the message is delivered.

Wonderful piece. I've liked Bresson ever since I saw Au Hasard Balthasar late one night on BBC2 many years ago (whatever happened to foreign language movies on terrestrial TV?). Sadly I haven't had a chance to catch up with much of the season running at the BFI but you've inspired me to head along to Lancelot du Lac while I've still got the chance.

Great post, Gracchi. I didn't know the film was based on Tolstoy. I agree that in the end, the film is not pessimistic.

Unpremeditated yes go- definitely he is such a great director that I think any opportunity to see his work is well worth it. I saw this at the NFT and have seen a couple of others- well worth it.

Welshcakes- cheers its a wonderful film!