Can a film in which a semi-naked Christina Ricci is dragged around on a chain by Samuel Jackson be anything other than an exploitation movie? Well I've had a go at answering that question over here at Bits.

It appears that Dave is holding a poll on his website for what his next piece of head gear should be- anyway suffice it to say that this is a vital poll because one of the options is a York hat- now as my dad was a Yorkshireman, a son of the moor, I feel it is incumbent upon me to direct you over to Dave's to vote for the right piece of headgear!

The Liberal Democrats and Mr Brown

Gordon Brown's offer of a cabinet job to Lord Ashdown is being hailed in many circles as a triumph- though James Lundie in the Guardian expresses some interesting doubts about the degree to which this might make a prospective coalition at the next election difficult. What is interesting though is how the whole incident reflects the impact that Iraq has had on British politics. Essentially people like James Purnell from Labour argue that this demonstrates how inclusive Mr Brown is- its interesting because inclusivity and consultation in Labour party terms always have meant over the last ten years including and consulting with the Left. What is fascinating about this move therefore is the sense that Brown by offering these jobs to the Liberals is seeking to look more left wing- a sign perhaps of the way that the left in the UK is becoming more middle Class and less tribally Labour, more orientated to special interests and causes.

I have just published what I hope is a rather interesting piece on blogging and the enlightenment over at Bits of News- its basically a suggestion that blogging expands what Kant called public reason to the whole population.

I've just posted two articles over at Bits- the first is about Salman Rushdie and whether he should have got a knighthood, the other is about the way that the film The Man who wasn't there demonstrates the difficulties of communication between men and women in a time where it is only structured sexuality leading to a rather hopeless loneliness.

The choices of Severine: a thought on Luis Bunuel's Belle de Jour 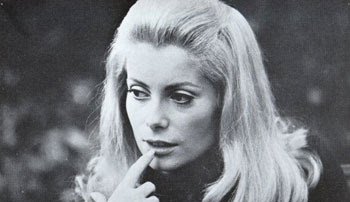 Luis Bunuel's film, Belle de Jour, has rightly been called a visual poem. There is a sense in which fantasy and reality merge, as metaphor piles upon metaphor, for the viewere seeing through the film to what it says is as complicated as perceiving what a poem means. Bunuel fuses narrative and dream together deliberately in his tale of a Parisian wife who out of boredom and frustration becomes a prostitute working in a brothel- she may not even do that- the film may be the story that it lays out itself to be or it may be an even grander vision- a gedanken, a thought experiment that lays bare what this woman really desires, what she really needs. Perhaps most emblematic of all is a scene in the brothel, a Japanese client turns to each prostitute and offers them a chance to experiment with a little casket which contains something that buzzes, one prostitute turns away in fear and terror, but Belle takes up the challenge- Bunuel cuts to the Belle's body lying on the bed that the client and his box have just vacated- a maid comes in and Belle rears up her eyes with a look of sexual satiation upon them but why we have no clue and what that denotes no idea.

Ultimately I don't wish to speculate until I have thought more about this beautiful poem of a movie- but there is something that I think does emerge and does make sense. This is a film in part about freedom- Severine's most free act is deciding to become a prostitute, everyone assumes throughout the film that she does it for money but in truth she needs no money, she decides to do it because she is free to do it. She decides to do it to demonstrate her own sovereignty- for her husband's friend Husson the act of becoming a prostitute demonstrates her undesirable maturity, it demonstrates that she is not a child, not a school girl, not pure.

This facet of the film is fascinating because of the way it is related to Severine's ability to love her husband. At the begining of the film she says that she loves him, but its easy to sense a relationship in real trouble- there is a void symbolised in the fact that they sleep seperately, he is precise and correct but not passionate in his behaviour to her. By becoming free Severine becomes free to love- and increasingly in the trajectory of the film she does fall in love, she comes closer, she rests her head on his breast and becomes a lover- but interestingly that's not what her husband wants. He wants children, he wants a conventional marriage and doesn't really understand her- at one point he thinks she is having an affair whereas actually her mind is loyal though her body is not.

There is something interesting in that idea woven into the film of the contrast between a conventional marriage which restricts freedom and love which requires freedom. For Severine it is impossible it seems- and via various parts of her past including sexual abuse by a plumber in her childhood there might be reasons- to mix the two. This isn't a complete description of what the film is about or means- there is much more to it than this- but its one very interesting thread running through it- in a sense Bunuel is drawing out a theme that is evident in all our relationships, by the time they become secure do they become meaningful. Is it possible to say choose to like an old friend- or do we only choose to like those that we have no obligation to? And if our likes are based on obligation what meaning do they have?

What is a love that is inevitable, a friendship that is an obligation?

The False God of the Private

Chris Dillow rightly points out on his blog that the solutions to the failures of the public sector are to introduce competition (where possible) and not merely to create, as successive British governments have, massive private monopolies to replace public ones. Creating such private monopolies tends to create firstly a vast regulatory structure to enforce standards and secondly a branch of administration between the monopoly and the public sector. Chris has grasped I think one of the major problems of the last twenty years- that every so often ministers have simply assumed that the word private is a synonym for good and public for bad. Actually of course the world is more complicated than that- both private companies and public administrations can perform well- but the better results tend to be produced in competitive environments- it is competition that needs to be embraced therefore and privatisation only as a means to that end- not the other way round.

The problem though arises in the fact that there are some areas of the civil service where competition is impossible- the army would be a great example- how you therefore deal with those areas is a post for another day...

Muslim figures from across the world have risen to condemn the recent knighthood granted by the Queen to now Sir Salman Rushdie, motions have been passed in the Pakistani Parliament and a minister there said it justified suicide bombings against Britons, the Iranian foreign ministry condemned it and the Muslim Council of Britain described it as a 'final insult' to the Muslim community of the UK.

I want to say something right here and now before I begin writing about this- which is that I have to take on trust the merit of Rushdie's work, I have to my shame not read enough to comment on whether he deserves the knighthood for his literary output, though he is definitely seen as a major figure on the literary landscape- there is no doubt that some of his novels like say Midnight's Children have been major events within the world of books. My only defence of his desert of the title is based therefore on heresay- so I won't be able to answer any questions with regard to his work.

But the inhabitants of Multan in Pakistan aren't burning his effigy in honour of a dispute about his works literary merits- they are burning it because they think that in the Satanic Verses where Rushdie implied that Muhammed was a paedophile he insulted Islam. It strikes me that writers and philosophers the world over will always insult the sensibilities of all the religions. It gives me great pride as a Briton that we could recognise Sir Salman for his literary merit, just as we would recognise a poet that insulted Christianity, without worrying about the sensibilities of those who would close down expression. I will post more on this later but have to dash- however as a final word, its a good day today to be British- arise Sir Salman of Free Speech!

James Higham is a great guy- who has had to leave his blog for a couple of weeks and entrusted it to various bloggers including yours truly. I've just written the first of probably many articles on there- on Wallace and Gromit's Grand Day Out and the fact that it is in my view a defence of the freedom to be eccentric- if that sounds interesting take a look and do whatever you do watch the film- its short and perfect.