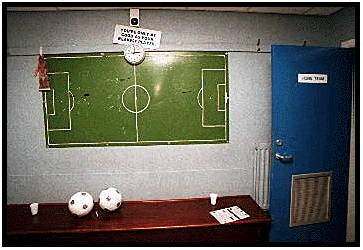 Football has not, despite the efforts of James Hamilton at More than Mind Games, been a field renowned for intelligent journalism. Much that passes for sports journalism is a summary of what two managers said or a too hasty analysis of a game that has just passed: much of what passes for commentary is banality (see under Redknapp, J.) or hysteria (see under Sky). When football commentators try and be intelligent, too often they seek to make the game an analogy for something else- in 1956 for example the Hungarians played with a socialist style, in the late 1960s the Argentinians, we were told, played in a militaristic style. There may be merit to such approaches- when it means that you take a disorder in a society and say that it effects what happened on the pitch (Madrid was Franco's club) but the merit is limited and as an analogy to politics, football soon breaks down. Ultimately the best football commentary is simple and intelligent: it is about a game played by eleven people, with two goals and a ball. Jonathan Wilson exemplifies how such an intelligent account can be written: his book is not flawless but it has the merit of being about some real interesting problems- the relationships (as Arrigo Sacchi understood them) between players, space and the ball itself. We will pass on to Wilson's flaws later- but the essential, telling, important fact about this book is that it is one of the few which actually analyses the game of football and tells us something about it.

What WIlson has written is an account of football tactics from the begginings of the organised game in the 1870s to the present Manchester United team of Rooney, Ronaldo and Tevez. The analysis is global. So we move from the England of 2-3-5, through Herbert Chapman's W-M formation (3-2-2-3), to the Italian Catenaccio, the Brazilian parallelogram, the Austrians in the thirties, the Hungarians in the fifties, through Ukrainian method and Dutch total football onto the great Milan side of the 80s and Mourinho's Chelsea team in the nineties. He takes in the development of new techniques of play- like the invention in Ukraine of pressing the man in possession, and the battles for the soul of Argentinian football between Carlos Bilardo and Carlos Menotti. It is all told with verve and pace- sometimes too much pace- I would personally have liked more discussion of individual games: towards the end of the book Wilson demonstrates the way in a game against Finland, a Yugoslav tactical change won them the qualifier and it would have been interesting to see similar discussions of other particular games. Maybe a discussion of tactics through the way that they have impacted particular games should be Wilson's next endeavour. But overall the themes are interesting- football started as a game about kick and rush, with several forwards and very few defenders or midfielders, at the end of the twentieth century it has become much more patterned and defenders and midfielders have become much more focussed on positioning (so that a good physical defender like Titus Bramble who has pace, tackles well and is tall became a liability at Newcastle because of a failure to be in the right position).

There are common threads through this story which are worth dwelling on. One is the opposition between two ideas of what football is about: is it about entertaining a crowd or about winning a trophy, ultimately what matters more- attendances or prize money? When Arrigo Sacchi said of his Milan team that he wanted them in the history books, what he sensed was that trophies are ultimately not an objective measure of quality- nothing is an objective measure of quality. Great teams do not always win trophies- the Dutch in the total football era never won a major international trophy, England were arguably better in 1970 than they were in 1966 but they won the World Cup in 1966 and went out at the quarter finals in 1970. Wilson reserves his own praise for the innovative- dwelling for example much more for example on Rinus Michels at Ajax than on the great European dynasties established by Bill Shankly and Bob Paisley- finding more room for Graham Taylor at Watford than for Brian Clough at Nottingham Forest. There is one great lacuna within his history- I suspect owing to this focus on tactical innovation- and that is Germany. Germany contested the 1982 World Cup Final, and won the 1990 final- but Wilson prefers to concentrate during the 1980s on the development of Russian football. That is not incorrect- for from his perspective the sides from Kiev and Minsk were more interesting than the disciplined side of 1990 from Germany but it is important to realise.

Wilson's book has flaws- but it also has acheivements. Why did the English not adopt more innovative tactics after World War II? Well the old W-M used wingers in profusion and the English had two of the best wingers that ever graced the field in Tom Finney and Stanley Matthews. Why did a side of Brazilians manage to play a football unconstrained by defence in 1970? Think about conditions in Mexico and you will realise that that World Cup allowed plentiful space for the likes of Pele to thrive- their opponents were worn out by the altitude amongst other things. Why did 5-3-2 fade and 4-5-1 triumph in the 1990s? If you play 4-5-1 against 5-3-2, your opponent has lost a player with a surplus centre half and your wingers and full backs can pressurise the wingbacks on the opposing side and cause problems for them (the Gary Neville-David Beckham partnership at its most devastating was all about finding an isolated full back and making him have to choose to go toward the player with the ball, at which point a simple pass set up a perfect crossing opportunity). Wilson understands the space of football brilliantly and I will go back to his book again and again. The problems with what he has written boil down to the fact that it could be longer, and more detailed, those are not bad flaws for a book, particularly a sports book to have. It is not often that a sports commentator leaves you wishing for more, Jonathan Wilson, like James Hamilton, is a very good example of someone who writes and thinks acutely about sport: he ought to have a booth on the radio or television, move over Redknapp, move in Wilson!

This has always been the edge that football as we know it has, and why no other variant can compare- the FA really did plump for the best set of rules. The game has evolved, but within such a simple framework, that it's like watching wars evolve, whereas other sports tend to be more static and inflexible- contrived in many ways.

I have to say, I never really rated Neville over much, though he did better at a club level. Still think Phil hung on his coat tails.

Curiously Crushed I do rate both Nevilles- perhaps Gary's injury will affect him but he was an incredibly efficient right back. As for Phil Neville- I rate him for his versatility- its always struck me that Eriksson should have taken him instead of say Jermaine Jenas to the world cup in 2006 because of the fact he could play all over the park. I think Phil Neville is one of those players who doesn't get as much applause because he is versatile and because he isn't that skilful, his primary attribute is being able to play in the position his manager wants him to and also his work rate. Worth saying though that he outplayed Viera once in the centre of United's midfield.

As to the FA and the rules- yes simplicity makes for complication in tactics- whether anyone had any idea in 1870 I doubt- I suspect it was more of a messy bureacratic compromise. Also worth noting that one key change which helped produce the WM was the change in the offside rule in 1925- before then two men played you offside plus the keeper, it was reduced to one man- an interesting counterfactual would be what would have happened had that change not gone through.

I think it's interesting that the Brazilians considered themselves to have stuck with pre-Chapman tactics right through to the 1970 World Cup Final.

England's post-War side of 46-48 probably didn't need tactics - man for man, it was the best team in the world by a distance, and only age plus spectacular maladministration plus bad luck got in their way in the 1950 World Cup.

Alf Ramsey came away from the 1953 Hungary disaster convinced that England should have had at least a draw (good example of a winning mentality over a realistic one there).

It's interesting that when the Nevilles were trainees, Phil was thought to be the talented one and Gary the grafter. A Jack of All Trades, in the end, but a fine Everton captain now. Both Phil Neville and Nicky Butt were sold too soon - the inadequacy of their replacements was one large part of MUFC's temporary decline after 2002.

Great book by Wilson and thoroughly deserving of this excellent review.

Right points in order- yes I agree the interesting other thing about Brazil is how nostalgic people are about that era. In a sense everyone anticipates Brazil at every world cup final, but also anticipates them because of 1970 and 1982 not to mention the world cups of Garrincha.

I agree with your points about the England team. What I'd never got till I read Wilson was the importance of 62-6 in english football. Isn't the interesting point though about Wilson's book that he is fascinated by the tactical innovaters like Ramsey and Chapman, but not so much by those whose strength like Busby and Paisley was in spotting and developing players. It would be interesting to read about the thought that has gone into that over the years- a book for you Mr Hamilton!

As for the Nevilles- I didn't know that about their comparative estimates as young players. Phil I think has really impressed me over the last couple of years- I agree that Ferguson made a mistake in selling him, in a sense one of the interesting things is the way that John O'Shea has developed into the new Phil Neville, reserve right, left, centre back and midfielder and someone to bring on to make the team defensive if United need to go that way. Neville is one of Moyes's most astute signings- not that expensive but really versatile, experienced, hard working and without a big ego.

What would you make of a theory that places principal responsibility for Liverpool's 1963-74 success on Paisley's presence in the boot room? I've always had a bad feeling about Shankly - all oratory, whereas Paisley maintained and improved Liverpool after '74 when all of the other significant sides of the 64-74 era declined.