New England exceptionalism-the odd one out in the early Republic 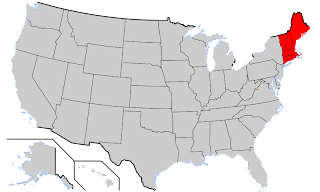 Who was the true "speical" or "unamerican" region in the history of the early American republic? Southern exceptoinalism in early US history as we have seen while real was limited. That is it consisted mostly of direct and indirectly of slavery .However an alternative candidate a very credible one was New England- the Six States Vermont, Massachusetts Rhode Island, Connecticut Maine and New Hampshire-at the north east corner of the United States then as now.

They were historically perhaps the most distinctive part of the United States at that point. Most American states were crown colonies or states essentially formed out of them (this was even true of somewhat Quaker Pennsylvania and somewhat Catholic Maryland-they were closely tied to royal patronage).. The earlier Massachusetts colonies were the product of religious dissenters-people who disapproved of early 17th century England as too Catholic and insufficiently "godly". This took the form of the closest thing to a protestant theocracy (one of the very few Christian commonwealths to have the death penalty for adultery-and one of the few to punish female sexual behaviour more than male) In what became the core of Massachusetts On the other hand Rhode Island (rather less topically) led to probably the nearest thing to freedom of religion and no church establishment the modern Christian world had seen. These roots were fundamental for understanding early New England-even as the religion of New England evolved massively.

Also very important Anglicans were consequently marginal Anglicans after 1660 Congregationalists and to some degree Baptists were the British equivalent of the bulk of New England. Thus when the "war of independence" (which most historians prefer to call the Revolutionary War) began new England was probably the most united region behind the revolution. This meant more of the pre revolutionary establishment survived in New England (particularly the older parts-Massachusetts, Connecticut and Rhode Island). Indeed this often included the old established churches- so protestant dissenters stated established (into the 1810'; and beyond) long after the Anglican establishments of the South which are perhaps better remembered today had crumbled into dust. Congregationalists proved more vigorous and in a sense more reactionary than the Anglicans of the South-who swiftly moved to quietiism in the wake of the Revolution.

This is turn helped shape the politics of New England. For a start the supporters of the establishment and its opponents (Baptists, Methodists even Anglicans now renamed "Episcopalians" to wash out the British taint) tended to struggle. Rhode Island was the last state to keep a clearly restricted franchise for white men (Virginia and North Carolina were the nearest rivals)-indeed so long it erupted into the Dorr War of 1841-1842. This was in large measure because Rhode Island had religious toleration. In the other states near universal white manhood suffrage was achieved in alliances with members of the existing electorate who opposed the church establishments-that is wanted to remove taxes for the payment of Congregationalist churches and lifting the restrictions on political office on non Establishment men. But the struggles went on for decades-as already mentioned the Whigs and Democrats in the 1840's were often divided along those old lines- with the result for example that Methodists were probably much less Democratic than they were in most of the rest of the United States.

AT the same time it remained militantly protestant-even if not necessarily Orthodox in Christology. When Catholics arrived in massive numbers in the 1840's and 50's the backlash was most intense in Massachusetts- where the “American" party managed to win in one election every congressional seat. Piety even if not always orthodox was strong- anti New England polemics of the early republic cast them as religious fanatics threatening a secular or pluralist nation. The United Evangelical Front was stronger in New England than anywhere else in the United States-helped by the fact even many Unitarians (an "unorthodox" denomination even then) would support its policies if not its basis. When it rallied fully rather than half heatedly behind the New Republican party the old divisions between the established and the excluded were thrown aside and it became the heartland of the new party.

Similarly New England was very different in a large number of economic and cultural ways. It combined badsoil-indeed almost uniquely bad with a strong mercantile and from the 1810's industrial tradition-it was very much a mercantile area of the United States. At the same time and linked with the piety it was an extremely literature area of the country. AS already mentioned the South allowing for literacy was typical of the United States-New England it was much higher.

Similarly its racial attitudes as the 19th century wore on were very distinctive- often blacks had equal voting rights and something resembling equal civil rights were in New England a far cry from elsewhere in the US- it should be pointed ut the black population was very low in New England. Indeed this was the case even in New Hampshire a Democratic stronghold. Indeed Massachusetts abolished it's segregated schools in the 1850's! As late as the 1860 the one area where referendums of white men led to votes in that state was t. ideologically as opposed to institutionally it was arguably New England which was odd on race-not the South.

Another moderately distinguishing factor was the lack of a frontier from very early -there was not a natural extension of it the way there was for the South (with mini Georgas springing up in Alabama, Mississippi and even Texas). Even the vague central region of New York/ New Jersey had clearer migration routes after the Revolution. Michigan was the nearest thing in the early republic to a New England migration state and behaved rather like one. The "presbygentionist" (segregationists who'd moved west under the so called" Act of Union" forming an alliance between presbyterians and congregationists ) sought to hijack its politics in the Whig party -created a huge backlash and Democratic dominance more or less uninterrupted till the mid 1850's. Then anti-Catholicism and anti-slavery smashed Democratic domination and Michigan was a republican stronghold for almost eighty years.

Most New Englanders thus migrated to areas filled with other settlers- New Englanders emerged as a distinctive force in Ohio and New York for example. They had a reputation for religious zealotry, moralistic authoritarianism, education, arrogance and commercial skill bordering on greed-none of these stereotypes being without basis. They were also clannish-John Quincy Adams the only New Englander to be president en 1796 and 1852-won enough of those states and the white House due to absurdly high support in the New Englander "Yankee" areas-the "burnt over district" and the Western Reserve.


This was linked to another aspect of the distinctive nature of New England -its political distinctiveness. Again and again in the early republic the rest of the United States united against New England-it's true the south did more so but it stuck out less. Once (in 1796) a clear majority of New England twice defeated a majority of the South. By contrast the South again and again prevailed over New England in a clear choice whether in 1800 or 1812 or 1828-and it did so because again and again the rest of the country preferred the South's chosen paladiains to the mercantile moralists of New England. The "federalists"-seen by many historians as the only party to defend the classes against the masses explicitly were rapidly reduced to an (overwhelmingly) New England stronghold-and it was there they made their best stand. The National Republicans (who included many federalists and many old Republicans) ended up suffering form the same problem.

These distinctions of religion, politics, ideology behaviour and economic interest can be seen most distinctively in 1812. 1812 saw probably the worst defiance of the federal government until the civil war-much worst than anything that happened in the South (including South Carolina's rather marginalised stand). America was in a struggle-seen as a struggle for survival with the United Kingdom. The British burnt down the White House. Meanwhile New England states were nearly all mobilized by federalists against the war -motivated by ideological (they were the most opposed t the French Revolution) , religious ( the establishments mobilized against "infidel" Jeffersonians and Madisonians) and most of all perhaps commercial-the British were their trading partners and the American government . Nor was this a "patriotic" opposition. They refused to send militia-while lending and supplying the British. Indeed British soldiers just back form the war was lionized in Connecticut high society at one point! The exception oddly was Vermont-on the border with Canada and a war zone- perhaps the Whigs were so strong latter there because they lacked the taint of federalists "traitors"

The extreme example of this was the "Hertford convention" -a convention called in protest at the war. It included elements who wanted to talk of secession. It should be added they were then marginalised-the then federalist and latter leading Whig Daniel Webster gave a great speech opposing secession and the. Nonetheless I hope I have shown the previous actions suggest New England was taking civil disobedience to near treasonable levels. Indeed We have a record of the writing of a girl who was taught at school (a very New England institution) and at Salem that most arch typically New England of towns- the richest town in the US through trade in the 18th century)

"Abagail Jane is my name, Salem is my dwelling place
Christ is my salvation and New England is my nation"

New England note-not the Union or the United States.

So why has New England's distinctness been so downplayed compared to South in so much of what is written and imagined about the early republic. I think the biggest single problem is the weight of subsequent history-a very common one in historiography. New England was very different once Catholics poured in and it was dominated by Catholic Protestant rivalries. Now New England is overwhelmingly Catholic and the New England that existed before the 1840's is even harder to imagine and reconstruct than the South of that era- in a sense the Yankee culture has deceased. Most of the entire South's bloody rebellion overshadowed the history between the Revolution and the civil War. Also after the war as this excellent work suggests the values of the Yankee culture in so many ways became the values of late 19th century America. In a sense the New Englanders were victims of their own success in the 1860's and after. They overcome their growing demographic irrelevance by making Yankee values whether an obsession with education or a pro forma belief in racial equality "American values". The fact the term Yankee became a term for northerner-and ultimately for citizens of the US as a whole is perhaps the surest proof of this. When you call an American a "Yankee" you are registering the long ago triumph of what was once had been America's most ignored , "aristocratic" and irrelevant region.

Labels: US Geography, US history, US politics, World history

Quite interesting, this excursion into US American history. A splendid illustration of how religion is comfortable with business.

But where are the Romans and Titus Livius? Is this the same old Graccus or his American alter ego??

It's Sulla I've been filling in for Gracchi the last week and also did a while back . His back though so you should a hear about the Romans-I'm looking forward to it too!