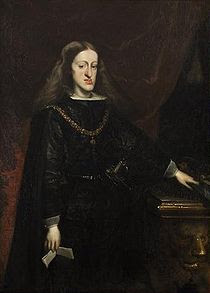 Throughout the last decade of the seventeenth century, Europe waited. The courts at Versailles, St Germains, St James and Vienna pondered upon the life of a young man in Madrid- Charles II of Spain- his death brought out into the open in 1700 the question of who would succeed to the Spanish crown and began a decade of unremitting warfare across Western Europe. Charles II has the dishonour of being the last Hapsburg king of Spain- after him the kings of Spain were princes of the House of Bourbon, from France. He was the last successor to an empire that had been founded back in the 15th Century and had thrived in the 16th century, even aspiring under Charles V some contemporaries feared to world domination. The story of how that empire came to relative decline and how its branches in Vienna and Madrid were sundered is a long one that involves a lot of detail about the comparative economic and military decline of southern Europe, particularly Spain, in the early modern period and the rise of her traditional enemy France. But that process was not aided by the fact that the last Hapsburg king of Spain was weak, feeble, ill and incapable (so his wife said) of reproducing. Why?

It is an interesting question- Charles II was definitely a sadly deformed young man. His lower lip did not quite meet his upper lip, he could barely walk in the last years of his life, was subject to delusions as his life finished, found speaking difficult (he did not learn how to till he was four) and was scarcely able to properly eat. Charles's conditions might seem like an accident- of course in part it was an accident of history- but on the other hand it was also the product of a strategy of marriages going back right into the beggining of the 16th Century. A new study estimates that Charles's diseases were the product of the Hapsburgs' desire to marry each other. Charles's mother and father were closely related and were also the products of interbreeding. His predecessors had also been effected by long years of interbreeding, their death rates were higher than the villagers they ruled over, despite living more pleasant lives, partly because of their susceptibility of disease. The famous Hapsburg jaw- jutting out under the mouth- was an inherited defect. The Spanish physicians diagnose from afar two particular diseases that they believe that Charles had, which explain his fairly unique clinical profile, pituitary hormone deficiency and distal renal tubular acidosis. To have two recessive genetic diseases may seem implausible but then the paper explains that Charles had a genetic interbreeding measure of 0.254 (interbreeding at the first cousin level produces a child with a measure of 0.0654) and that therefore it is not impossible or unlikely for him to have this rare combination of diseases.

What does this do though beyond illuminating the condition of poor Charles II? I think it actually is very interesting- and its important because of something that people often forget in their analysis of why families rise and fall- and that is the increasing chance of intermarriage that comes with superiority. The Hapsburgs ended up intermarrying so much when they had become supreme in Europe- before hand marriage as a strategy had earned them territory (for example the Southern Netherlands) but eventually their primacy created a situation in which there were few non-Hapsburg suitable partners for a Hapsburg prince. By 1500, their only peers were the monarchs of France with whom they were locked in war: is it any surprise that they ended up marrying each other. Marriage functioned for the Hapsburgs as a tool of status. Marriage for the Hapsburgs was a political strategy. In the short term it created their vast empires- for whenever a duchy's male line became extinct it descended through the female to the Hapsburg claimant. But in the long term, as their successful policy raised them above all other European Catholic rulers, they had to turn to marrying each other and that created the malign genetic inheritance that ruined Charles II's life.

All of this is only conjecture- even the researchers here admit that their research is conjecture- and my argument is conjecture based on conjecture therefore. But I do think it is interesting to consider how a strategy of marriage followed by the Hapsburgs led naturally to intermarriage and hence to disaster. If Charles II's life was not so tragic, we might be able to describe the demise of the Spanish monarchy as a kind of ironic comment on the centuries of Hapsburg marital policy.

what i found remarkable is how able many of were (e.g Maria Theresa the empresess) -suggests there's a big difference between quite high interbreeding and Charles the sufferer's absurdly high amount.