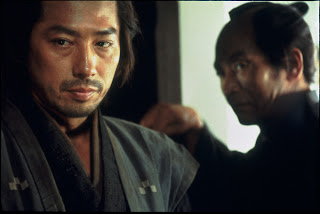 During the 19th Century Japan went through vast and important changes. The introduction of Western Influence through the Convention of Kanagawa in 1854 and the Meijj restoration of the 1870s set Japan on a course to the twentieth century. The social impact of those changes was also vast. But Japan at any rate had been going through changes which were just as profound: the hereditary samurai caste gradually were becoming civilian civil servants, their ethos of honour changing as they swapped arrows for accountancy. Twilight Samurai is about a man at the intersection of those moments- set just before the Meijj Restoration, the film concentrates on Twilight Seibei. He is a samurai working inside a castle governed by a lord as a clerk of some type. He is called 'Twilight' because unlike his fellow workers he feels he has to go home to his two small daughters and his aged senile mother, rather than carousing through the streets. The story is in part about the development of a relationship between him and his childhood friend Miss Tomei and also about the development of him himself as a person caught within the feudal culture of Japan and the clerical world of the Castle.

It is the latter I want to concentrate upon: but that is predicated upon the former in the story. Miss Tomei has been divorced- and her former husband, a drunk, insults her and Twilight Seibei's friend her brother. Twilight steps forward to challenge the husband to a duel and turns up with a stick in his hand with which he proceeds to knock the other samurai stone cold unconscious. The point of this little episode is to demonstrate the way in which a Japanese cult of honour still requires duelling and violence in order to perpetuate itself. Miss Tomei appears to live in her former husband's compound- she cannot escape him. Twilight must avenge the insults by fighting- there is no other way. The husband takes up his offer and imagines a real duel- but Twilight fights with a stick instead thus offering a double humiliation, both by defeating the husband and refusing to fight with a sword. His victory is a triumph of his own ethos which is clercial not chivalric: he undermines in a sense the potency of the duel itself within this world by disrespecting it- but crucially he can only do that by turning the duel into a comedy, by using a stick not a sword, he must still risk death.

Hearing of this encounter, the clan which is in political turmoil investigates Twilight and finds out that he can fight. They then commission him to fight someone that they need killed- who has been ordered to commit suicide but refuses to do so. Twilight has to accept because the threat hangs over him that if he does not, he too will be killed. We saw that he could in the earlier example turn a private duel into a masquerade- he can punish the other samurai through humiliation and yet not kill or destroy another life. However this is not true in the second example- he must kill or be killed. The political pressure of a code of honour is too much for the samurai- ultimately he is a fighter not a clerk, that is his hidden value to the clan and to his family. There are obvious touching scenes as he leaves possibly to die with his children and Miss Tomei- the centre of which must be that like a clerk he prioritises the relationships with his family over the honour of his clan. Caught in this dilemma, Twilight has to continue being a samurai- and the ultimate destiny of being a samurai is to die young and kill often. His eminence therefore creates his own eventual death and in a final duel we see an emblem of how all lives of honourable violence end.

Amongst the many questions at the heart of the film is whether Twilight is right or not. Whether his civilian values, the values of a new Japan, in particular a post-1945 Japan, are preferable to the values of the older feudal Japan. The film is ambiguous about this because of course despite preferring the newer values Twilight becomes an embodiment of the older values: his daughter closes the film in retrospect by telling us she thought her father lived a good life, I can't help thinking that the closure of the film is subtle and ironic. The daughter is validating the fact that her father was loved- as he would desire to be- but also that he died young and enjoyed his life. She has told the story of Achilles- Twilight appeared to want to be Odysseus in a society that would only let him be Achilles, that was his tragedy, something his daughter ironically appears by the end of the film to have forgotten.