He shall from time to time give to the Congress Information of the State of the Union, and recommend to their Consideration such Measures as he shall judge necessary and expedient.

This instruction in the constitution has developed into one of the most important pieces of theatre in the western world. Whether it be Lincoln, Kennedy, Bush or Obama, American Presidents have used the state of the union to make their case and think in public about what they want to do with their time in office. Symbolically the opposition can also signal their dismay at the President's choices by not applauding or not standing as he enters. When you think about it the requirement seems a little odd, if you were designing a constitution tommorrow, would you include a note which said that the executive had to come down and formally speak to a Leglislative that can interrogate his officers anyway? Furthermore if anything the members of individual districts are more likely as a body to know what the state the union is in, than a President based in far away Washington and surrounded today by so much security that normal life almost certainly vanishes.

Why did the founders include this point- after all the first President was even more hampered by poor transportation networks and the fact that most of America (including the largest state Virginia) was predominately a rural country. We can only understand the state of the union if we begin to look at the figure the President was most taken to represent- to find that, we can look at the debates surrounding the inauguration address that Washington delivered in 1789. John Adams, the Vice President and thus President of the Senate, was incredibly concerned: Adams had two concerns, firstly when Washington was in the senate was Adams President of the Senate? and secondly how should congressmen behave when in Washington's presence. Senator Richard Lee of Virginia remembered from his stay in England that when the King addressed Parliament, the Lords sat and the Commons stood. Senator Izzard of South Carolina said that the Commons only stood because they had run out of seats! The Vice President didn't help by saying that when he had visited the state opening of Parliament as ambassador to the Court of St James, he had been unable to see above the heads of the crowd who was standing or sitting. Crucially though note that Izzard, Adams and Lee all agreed that whatever Congress should do it should behave to Washington as though he was the King.

Federalists talked openly during this period of the Presidency as a monarchical institution. Thomas Jefferson, no Federalist, even beleived that Washington would hold it for life, and imagined an elective monarchy on the model of Poland. When Washington appeared in places, the bands struck up with 'God save the King': John McHenry of Maryland even told Washington that he had become King. Gordon Wood has plenty more evidence in his recent book. What is so interesting about this is that one returns to the concept of the state of the union and the inaugural: the model must have been the English custom of the Queen's Speech which opens Parliament- one of the significant English ceremonial constitutional occasions where the Queen in Parliament (the English sovereign) is seen in all its magnificence. When Washington came to Congress, the same idea was visible and like British Kings deifinitely had, Washington even decided in his first couple of years to attend the senate and to interfere in debate.

Most of this narrative is derived from Gordon Wood's recent book- but what we can add to it is a further speculation. Because here we have the same plant- the inaugural or state of the union- planted in very different soil. In Britain it turned into the Queen's speech, in America into the modern state of the union. I think there are interesting contrasts here: firstly one can see that in both countries the politics of party- something that repelled every eighteenth century statesman- has taken different forms. The Queen has moved above the politics of party in the UK and so drones unimpressively through her government's measures- the Prime Minister listens. The President in America effectively leads a party and so you get the great orations. In Britain the speaker does not hold real power, in America the speaker does hold real power. I am sure that others will be able to furnish further contrasts but this is a subject worthy of exploration: because of the way that the American constitution was drafted, very much with an eye on British precedent, the United Kingdom and the United States not to mention several other countries form useful counterfactuals to each other. We can see how the same institution- in this case coming to the Leglislature to make a speech becomes a very different event depending on the ways that the respective constitutions have historically been configured. 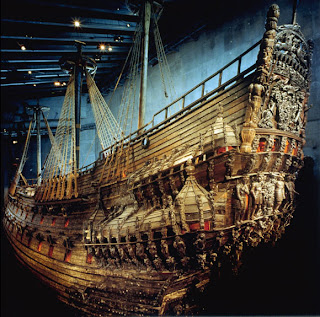 I want to apologise for not posting this week- I was in Sweden and forgot to organise cover. Whilst I was in Sweden though I saw this ship, pictured here. It is the Vasa, launched in 1628, it sank 20 minutes later on its maiden voyage carrying Swedish troops and sailors across to Poland in order to fight in the 30 years war. It was recovered later from the sea bed and is now part of a museum in Stockholm. It is a beautiful ship- but completely impractical, sitting very high out of the water and yet being very narrow, it was always vulnerable to the movement of the seas and to a gust of wind. What though it also symbolises in some ways is the emense power of early modern monarchy: Gustavus Adolphus built the ship as a direct rebuke and challenge to his kinsman Sigismund King of Poland and the ship's motifs and symbolism reflects that. You could portray it simplistically, as our tour guide did, as a massive display of one up man ship on behalf of one member of a family against another- of course it is not and the thirty years war was about much more than the fortunes of the Vasa House (the correct way to worship the Christian God for a start) but one of the powerful motivations behind the war was the amour propre of monarchs. The Vasa stands as a massive engineering monument but also a monument to folly.

Looking at the decorations, I thought of Shelley

"My name is Ozymandias, king of kings:
Look on my works, ye Mighty, and despair!"
Nothing beside remains. Round the decay
Of that colossal wreck, boundless and bare
The lone and level sands stretch far away.

Read Gustavus for Ozymandias, and make the monument a ship and the poem is entirely apt!

Freemasonry and the American Revolution

Gordon Wood in his new history of the post-revolutionary era observes in passing the popularity amongst the founders of free masonry. Conspiracy theorists have made a lot of this over the years, reading it as a sign of the commitment of Benjamin Franklin and the rest to a secret agenda and a covert constitution. Wood suggests that we should interpret this within the context of its times: Freemasonry developed in some police forces in the UK for example into precisely what the conspiracy theorists denounce but that was not what it was in eighteenth century Philadelphia. There are two things that distinguish freemasonry in the world of the eighteenth century and made it attractive in Wood's views to some of the American founders- the first was that it was irreligious. Because Free masons belonged to any and all denominations, they belonged to none. This point is worth considering because it underlines the toleration implicit in the founding. The founders were not trying to found an Anglican, Baptist or Presbyterian nation. Secondly Freemasonry could cross social and geographical lines: a Freemason was a citizen of the world. America was founded in part on its promise of universality and men like Franklin believed in a republic that crossed national and racial boundaries (save in the slave owning south). American patriots saw no contradiction when one of their number retained his place in American politics and sought to run for the French National Assembly in 1792. Again Freemasonry crossed boundaries- whether those be the social boundaries between gentlemen or the geographical separations between nations.

Wood's insight is interesting because it shows how Freemasonry- now the preserve of old men and silly handshakes- could look in the eighteenth century like an egalitarian and tolerant movement. That was its attraction to the founders at least. Furthermore it reminds us of the internationalist nature of the American founding and its addiction to crossing religious frontiers.

I found this a very moving post. My sympathies are with the writer and his family. Nothing more to say.