Joanne Bailey in her study of early modern marriage notes that 'it is important for the historian not to treat these moments of extreme marital tension as abstracts'. She is absolutely right- the historian's focus is not, like the social scientist's, upon society in the abstract but upon individuals as they go to make up society. It is worth thinking about the implications and reasons for this for a moment and this is what I propose to do here. Basically why is history about the particular and not the general? And what furthermore can the particular tell us that the general law or principle can miss? The answer to the first might be a just so argument- history is history, not social science which is why I think we need to consider the second question in a little more detail because it will tell us why it is neccessary that we understand the particular and think about it before moving to general theories.

The first is suggested by Bailey's next line, 'these events, invariably sad, sometimes uplifting and touching, often brutal and callous, had great meaning for the people involved'. History does in one sense fulfill an obligation to remember, conveyed on the future by the past. Secondly remembering this kind of event makes it easier to understand people's lives in the round, and it is easier in this context to understand those events in the particular. The reason for this is that all people from all times do not react in the same ways to events, what may be a source of joy in one civilisation is the source of anger in another. Empathy is a large part of the historian's armory when she comes to deal with what happened. It is important precisely because if we are to discover anything more than our own impressions of the events of the past, we need to recover what those events meant to those involved. The general rule that we might formulate therefore is effected by our particular instances: searching for the general may bias our conclusions towards accepting realities of modern life, whereas searching for the particular confronts us with the strangeness of their lives.

History, if done properly, is about strangeness- its about trying to find out what was different about the past and see why intelligent men and women, good men and women, believed in witchcraft or sacrafice or patriarchy. History seeks not to excuse but to understand how the world looked to them- because if we do not understand that all our conclusions about that world will become false- that's why Bailey's statement is true. She has grasped that the particular conditions our approach to the general- because only through a particular instance can you grasp how people in the past related different facets of their lives together, and through doing so you are committed to unravelling the strangeness in those lives, rather than stringing together the commonalities between now and then in a skein of general theory.

The Consequences of Love 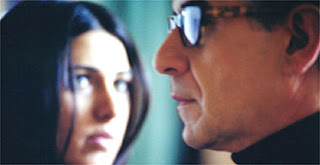 Every so often I have to go to a hotel for work, and sitting there with the rest of the team I work with, I see others, strangers sitting there, reading newspapers and sipping glasses of orange juice at breakfast. Theirs is a strange society of meetings in lobbies and friendships numerated in resturants and hotel bars, that they do not know. Many films have tried to capture this kind of reality: Lost in Translation is perhaps the most famous recent example and deals with the relationship between an older man and a younger woman, a relationship that is always sexual but never strays to sex. The Consequences of Love takes that same theme and examines the same issues and too has a relationship between a young woman and elder man where the possibility of sex is ever present but the reality is never there. But it is so different. Whereas Sofia Coppola's film was riotous and sometimes sweetly sad, this is sadder and lonelier, more realistic and more profound at the same time. Paolo Sorrentino is a film maker whose films do not always satisfy and yet with the Consequences of Love, he did achieve something very special. He brought together a visual flair together with a theme that he could do justice to: the result is something truly special.

The film is about a man who lives in a hotel in Switzerland. He stays in the hotel most of the time, his life is lonely, his only friends some ex hoteliers who lost their money through gambling and defraud him pettily of his money. Apart from that he navigates the city on his own, sits in the cafe on his own, avoiding eye contact, avoiding speech- all he does is think and ponder- a man without imagination, he is content merely to exist. He does everything with a precision that reminds one of an old English butler, regularly on Wednesdays at 10 he injects himself with heroin, a regularity as controlled as the way he opens a car door or the dapperness with which he exits the hotel. His brother at one point turns up, our hero cannot bear to have a real conversation with the brother and informs him that his best friend is someone he has not seen for twenty years: once the clock has been set to friendship nothing can change. He is encouraged by his brother to talk to the waitress in the resturant, a waitress who has said hello to him every day for the last two and a half years but whose glance he studiously avoids.

Olivia Magnani's Sofia is an image of sleek Italian beauty. Every man in the bar tries to chat her up- but she resists. Our hero clearly likes Sofia but he only approaches her after his brother's order and he does attempt to contact her. His gestures are clumsy, giving her a car worth 100,000 dollars is not a gesture, but the swipe of a hand which may knock every chess piece to the ground. Such grandoise gestures are repaid by Sofia with kindness- she knows that he is attempting in his own way to make her happy. Unfortunately this relationship is stymied by two facts: the first is that tragically on the way to see him for his birthday when they will go out for supper (the first birthday he has gone out for in ten years), she crashes her car and is delayed. On the other hand our hero is indebted to the mob- the 100,000 was stolen from them though he hid the theft with a successful deception- more importantly it comes to the point where he has to choose between Sofia and the mob. Rather than going further what we have here in a sense is a more complicated tale and yet a more simple one that Lost in Translation: Sorrentino's interest is solely on the man and his loneliness, Sofia is an image of perfection rather than a character and Magniani is only given a couple of lines, none of which are interesting.

So the focus is always on our hero- the film's argument concerns him. Perhaps it is a reminder that engagement is uncertain- the Augustinian point that human relationships are always uncertain. Augustine read out of that that one should avoid relationships that will always fail and turn towards a divine lover that always exists: but since Bergman cinema has had to cope with a world in which God has died. In such a world Sorrentino offers a perspective that says rather than being eternal, humanity is transient- as transient as the loves that make up our lives. Our hero before the arrival of Sofia isn't really living, he is existing, regular as clockwork- but love exposes him to damage and the speed and pace of life. Like an insect who consumes itself after long gestation in a single moment of love, our hero's death is worth more than the entire ten years running up until that point. Furthermore at that moment he is able for the first time in years to connect with his friend, his only friend in the world, an electrician making cables over the Alps- Heidegger was right, we become ourselves most in the extasy of love that marks death.

Only extasy is the wrong term for this man's death. Another way of reading the film is that it is about the impossibility and stilting nature of communication itself. We all know now thanks to Austin that communication is an illocutionary act: it means what it means within a context, a speech is an act. Whatever our hero does he is misinterpreted though: his shyness is read as haughtiness, his concession to the waitress could be read as the attitude of a dirty old man, his relations with the mafia are based on misunderstandings. Despite his obvious intelligence he too reads situations wrongly: when he stares wistfully at the girl's 'boyfriends', little does he know that they are driving instructers! Throughout the film, gambling becomes a metaphor for life- our hero's main skill is his poker face, the more we know about him the more we ourselves realise his facade has taken us in. But throughout the film noone knows what he is thinking, what his deepest darkest secrets are- they assume the worst not the most banal. Sorrentino is able using this both to flip and to direct our expectations: from the first frame of the film, we are uncertain. In the far distance we see coming down a moving floor, a man in a suit, he wheels a suitcase: I thought I was in an airport and this was the hero, a little further in and I recognised it could not be the latter because the actor was wrong but I still thought hte case was a case and the airport an airport. Little did I know- what I did get right was the mood of the film- it is established in that first shot and runs throughout, isolation and its effects.

That is the keynote of the film, whether you think it is about love or about communication, about Augustine or Austin, depends on your point of view- but what you cannot deny is that it is at its core about loneliness. Hotels are meant to be places of companionship but in Lost in Translation and in The Consequences of Love they become metaphors for profound loneliness.