In which we serve 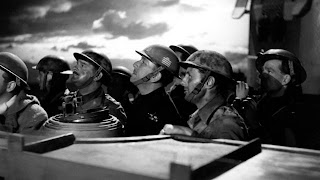 A ship goes down in the seas near Crete and through flashbacks we learn about the lives of the sailors who fought within it. The ship goes down and wives and children wait back home to hear about what happened. Bombers fly overhead and men come back from the sea to the corpses of their families. In which we serve is not an easy film to watch. Oh it has the stiff upper lips, the clipped accents, Celia Johnson doing what only she can do- on the edge of tears maintaining an accent which speaks of cups of tea and cucumber sandwiches, John Mills with a false and unimpressive cockney accent and so on- and it is an English film, all about duty and putting on a good show. But it is also an interesting war film.

Firstly it is a key film. Lets start with the careers that started on In which we Serve. John Mills, David Lean, Richard Attenborough and Celia Johnson all made their bows in this film. Those four names incarnate British cinema of the 40s. Lean went on to have one of the greatest careers of all time as a director. Attenborough wasn’t far behind, neither was Mills. Furthermore the film represented technical challenges, presenting a fleet at sea. These were the days that when you filmed in water, you filmed in water rather than in a blue screen filling in the water later. In this film, you filmed in water with diesel oil within it. John Mills had to be shot at one point, Coward remarked that they hadn’t finished the picture so they couldn’t shoot him in the arm, he eventually ended up being shot with a condom.

Secondly it is an interesting film. It’s a patriotic film because it is a propaganda film. Johnson though remarked that it might be too close to people for the British population. It is a very sad film- it is about a catastrophe. Its about Lord Mountbatten the commander of a ship that actually went down. Beaverbrook mocked it because Coward was an effete matinee idol, but of course then Coward had backed Churchill and Beaverbrook believed that there would not be war. Coward thus took his revenge by putting a copy of the Express announcing there would be no war in Europe in 1939. The tragedy though is what makes the film something that endures: this is not a story of British triumph, it was filmed in the early 40s and the greatest British success it mentions is Dunkirk: a success that was a retreat.

Casualties fill the film- ‘now she lies in fifteen hundred fathoms together with half our shipmates’ being one choice line. There were real sailors and real soldiers in the film, Mountbatten a friend of Coward secured them during their leaves. That people died in the second world war just like in the first. It is cloyingly patriotic at times- a last speech about the great British tradition in the sea is perhaps a little Arthur Bryant for me- but at its best the film’s patriotism is the patriotism of defiance, grim defiance and resignation. Resignation is perhaps the last emotion in this film: unusually and impressively we don’t only see the men struggling in the sea, we see the women at home. Celia Johnson’s character, the wife of the captain, gets the best speech in the entire film when she has to announce that she has a rival for her husband’s affections- the ship. There is something too old fashioned about it in the sense that it is a speech by a woman who is primarily a wife- in that sense it shows the world from that point of view- but there is something very moving too. In a sense an obsession like the sea or anything else is an obsession that takes you away from normal life and towards it: this costs others so much more when your obsession could easily lead to death.

I do not imagine that In which we Serve would suit every taste. But I enjoyed it. Its patriotic, stiff upper lipped and easily caricatured. On the other hand it is true to the grimness of the war for the sailors and those left behind and its emotional costs. It is not perfect, but as propaganda goes, its pretty bloody good! 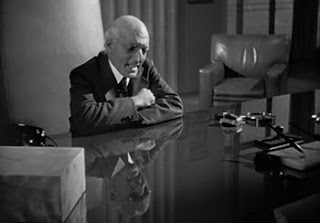 People talk about Citizen Kane as though it is an old film. It is. It was made in the 1940s by one of the master spirits of that period in America, Orson Welles. But it is an old film in a different sense as well. Welles was only 26 years old when he made Kane but what he made was a retrospect. This is a film that happens after the hero, Charles Foster Kane, is dead. Everything that we see and hear are stories told about him by his old companions, friends and enemies. Our gaze is mediated through the gaze of old men and women: Joseph Cotton's Jedediah sitting in his hospital, Everrett Sloane's Bernstein the honorific chairman, Mr Thatcher the stentorian voice of old Wall Street- even Kane's last young wife is obviously faded. Everyone in this film tells the story from the perspective of age- the disease that Bernstein tell us is the only one that you don't look forward to having cured. Kane's comments on himself are often retrospective too: he has achieved something he tells Mr Thatcher but might have acheived more without an inheritance. From the first moment of the film, age and the sense of looking back on the past from the vantage point of age is a constant impression: the News on the March segment with which the film opens shows us Kane telling a reporter how they used to do it when he was young.

Telling a story from the vantage point of old men and women means that the story is treated in a certain way. Firstly Kane is a film about memory- everyone who has seen it remembers Mr Bernstein's comment:

"A fellow will remember a lot of things you wouldn't think he'd remember. You take me. One day, back in 1896, I was crossing over to Jersey on the ferry, and as we pulled out, there was another ferry pulling in, and on it there was a girl waiting to get off. A white dress she had on. She was carrying a white parasol. I only saw her for one second. She didn't see me at all, but I'll bet a month hasn't gone by since that I haven't thought of that girl."

It incorporates a great insight about age but also a great insight about memory. Memory is selective. Welles presents us with Kane's life through stills- famously there for example there is a moment where he shows us Kane's marriage breaking up through a set of short exchanges with his first wife over breakfast. You could expand this to the entire movie though: it is episodic. We catch glimpses of Kane: no wonder the reporter who is trying to discover who Kane was confesses he never knew at the end of the film. These shards are what makes up a man's life: and at the end of the film they along with the rest of Kane's life (his possessions) are burnt.

However there is more than even an analysis of memory as forgetting here, there is also an analysis of memory as rememorising going on. From the vantage point of age, all Kane's hopes for the Enquirer look faintly ridiculous. His political campaigns seem laughable. Jedediah is the most cynical character, commenting that all Kane cared for was Kane. The attitudes lie over the memories and make all the memories of Kane's youthful idealism ironic. When Jedediah presents Kane with the statement of principles he drew up earlier in his life, we are meant to realise this is a turning point. But what we have here is an incomplete picture: we see the moment he drafted the principles, through the moment he broke the principles. We see his 1920s through his 1929. We see his first marriage through its failure, his political career through its disaster. Welles does this to us by telling the story twice, in the News on the March segment and then in the film, and by the commentary of his characters. Here he makes a point not about memory as incomplete, but about memory as ironic and untrue. To understand Kane in one sense when he wrote the principles you need to ignore what he became.

This isn't the only way of reading Kane's story but I think it is one- like any great film there are plenty of ways of reading it. This is a film about memory and the way that memory drives our perception of our own times. Even the word rosebud, the centre of the reporter's investigation and Orson Welles's sly revelation of what Rosebud meant, is supposed I think to make you realise how odd memory is. If Kane had reorganised his own history around the idea of Rosebud (which we presume he had), the would have mis-remembered what had happened.