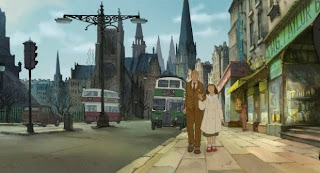 We misuse the concept of tragedy in human life. Tragedies like Macbeth are about crises- something that happens that drives everyone to disaster. One minute the world is stable and the next through a tragic flaw and a sudden set of decisions, the world careers off into a darkened path. Those tragedies tell us a lot about the world and the nature and vulnerability of human life: but they are not the tragedy that faces most of us. Most of us won't have a tragic flaw that creates war between nations- we don't have tragic flaws that are completely irredeemable either. Most of us are flawed but Othello and Macbeth act upon a greater stage. Our tragedy is not that often but its what Konnie Huq describes here, its growing old, and feeling pain and suffering slowly unto death. Age itself is no tragedy, people age well and gracefully- just see John Pocock. However the wrenches of age are something we all have to, hopefully, face. Children leave, someone cleverer comes along at work and someone who can contribute more energy, fashions change, the world moves on.

The Illusionist is about the transition from one world to another. A magician lives in Paris and moves to follow his work. His work is declining though. Who wants to go to a magician when you can go to the Beatles. So the Illusionist- M. Tatischeff- moves over to London. His show closes there and various other shows collapse. He goes up to the North of Scotland through a series of accidents and eventually ends up in an inn there. He does some tricks and the crowd is more appreciative- but in particular one little girl believes in his magic. She believes his tricks are correct. He leaves the island to return to Edinburgh. She follows him, leaving home. He therefore becomes in a sense her father and in Edinburgh we see a series of charming moments in which father and daughter bond over the city and the experience of being in it. She slowly learns how to be a city-girl. He has some success and finds in the other acrobats and show people some solidarity. So you see a relationship evolving- a concern evolving between two people and the way that Sylvain Chomet films this concern developing is beautiful.

So what happens then is the film returns to its poignancy. The magician becomes ashamed of his lack of ability to provide for the girl, for his quasi daughter. His relationship with her is complex: she is slowly discovering his limitations and he finds that process difficult and disturbing. He finds his pride affected by that. Its another symbol of the way that the world seems to be moving on. Furthermore towards the end of the film she discovers someone else- she becomes located in Edinburgh, he still remains a flitting presence for whom Edinburgh is a location rather than the location of his life. This film is therefore one of the saddest you'll see and there are moments which reflect that universal tragedy of time passing. Chomet gets the mixture right: the Illusionist is losing his world- the world of the music hall- but he also has this personal separation from his quasi daughter.

You'll notice I've not mentioned a single actor- that's because there aren't any. Furthermore there is very little in the way of voicing- there are some words but they are in French or Gaelic. They don't really matter- the words are just sounds rather than meaning anything. Chomet draws so well that his characters act, appear very credible. You feel the film is magical- there is a magic in the animation that anyone adult or child can get. The animation is good enough though that the actions, the gestures make sense as actions or gestures. Its powerful both because its animation and because you forget its animation- because these characters matter to you as well as being mythical. Each character, even the minor ones, is captured. For example at one point an American in a white suit comes on to the screen, his casual arrogance is captured to a t from every part of his spotless white suit to the flashy smile he brandishes. Chomet captures Edinburgh brilliantly as well- there is one particular scene on a street corner which gave me a moment of deja-vu. I am sure I have been on that street corner and can remember it exactly. Edinburgh is portrayed as a traditional city, there are other parts of the city to see and this is a chocolat box Edinburgh but on the other hand, it has never been as beautifully animated before. The beauty of the city aids the spirit of poignancy in the film: Chomet makes wonderful use of the lighting and shade in his filming and it adds to what he wants to tell us.

What is that? I think there is something important here about ageing, the process of the world changing and the sadness of losing a career or a world that you inhabited easily, along with losing a child to the world they have grown into. The last shots of the film are about the acceptance of that process by the lead character. Sadness and poignancy does not mean that life has ended, but that one type of life has passed on and another form starts. So the film really offers us the poignancy of ending, but towards the end it shows the new lives on offer to its characters.