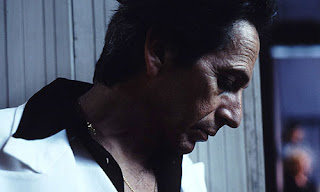 Tony Manero opens with a queue. The queue to get into a talent show contest where Chilean TV in the 1970s will select the best Tony Manero impersonator- for those who don't know Tony Manero is the name of John Travolta's character in Saturday Night Fever. Our 'hero' Raul is one of the characters queueing to take the floor, but he has arrived a week too early having got the date wrong. He therefore has to return back to his squalid room and his own dance troup (consisting of himself, his girlfriend, his girlfriend's daughter and her boyfriend). The film focuses in on Raul- an unpleasant man who beats to death old women in order to acquire their TVs and who casually murders as a means to achieving his own desires. His desire is to be the best Tony Manero impersonator in Chile: therefore he murders his way to a set of glass bricks to insert on a stage above flashing lights, he murders a projectionist who switches from showing Saturday Night Fever to Grease, and he defecates on the white suit of a rival impersonator. This is man as a moral abyss: his focus is purely upon becoming the best Tony Manero impersonator there is.

The film is set in the Chile of General Pinochet. I make no comment on the accuracy of the film to this period of Chilean history, I do not know enough about it. Allende is but a memory and not mentioned in the film. Opposition whilst possible invites police attention and in the end brutal torture. There is an immediacy to life: none of the characters in the troup have a long term plan. They think about escaping their situation or Chile, but none of them move and all of them anchor such dreams on the unrealistic prospect that Raul cares more for them than he does for Tony. What we have here is a casualness about life and the world. Raul exemplifies it with his murderous tendencies, incidental to a Beejees song. The other characters share this though- they might strive against the regime but fundementally they live their lives for the moment. This derives in part from the fact that none of them have much to live for: the house is dirty, the dance troup shabby, Raul is a dictator and their lives are inching towards the grave. There is something Hogarthian about shabby sex in dirty rooms and feeble impersonations. The Chile of Pinochet is represented here as murky and mundane. Perhaps this is most evident in the streets strewn with stones where the police seem able to create fear but not safety: Manero murders with impunity, only opposition activists distributing newspapers are in danger.

This is fused with the world of celebrity and capitalism. This is a world in which character is driven by commodity. Raul wants to be Tony Manero. His world is impoverished, the culture of the dance troup is vitiated by the world of Hollywood. Raul neglects the Chilean and the interesting for the American and the banal. This tale has been told before in cinema from the 40s in Europe to the 2000s in Latin America, the tale of the American empire of culture that means that we are all truly Americans, is one that's been retold and retold again and again. But the truth is that we are all Americans of a certain type and Raul is not a countryman of Nathaniel Hawthorne or Edgar Allan Poe: where America's culture runs from top to bottom, from thought to entertainment, Raul creates out of entertainment a philosophy where none exists. He models his life on what was supposed to be a diversion: mumbling in the dark the words of John Travolta he treats the amusement of an idle hour as though it were holy scripture. Empty and filled only with this aspiration, Raul is in truth the most boring of men and the most boring of characters. The fascination of the film lies in the fact that everyone else seems obsessed by this idiot.

Is this what dictatorship and celebrity do? Turn a world of interesting people into a city a boring ones: confine horizons, alter moral consciousness and change the world to make it smaller, drabber and dirtier. There is more here than a purely political comment: Raul thrives in Pinochet's Chile and maybe is an avatar of the dictator himself, but he would be a psychopath in any society. The difference maybe that it is only in dictatorships that he would survive. Like a bug, Raul thrives in the wet and the dark, and dictatorships are wet with blood and dark with censorship. The poverty and poverty of aspiration aids him. At the bottom though this is not a political study, but a study of a psychopath- a man for whom ends outweigh means. A man with a cult- a cult of celebrity- in this case Travolta but it might be a footballer or a Big Brother heroine- its just the same. Raul is a monster- and you feel dirty after watching this film, contaminated by its dankness- equally it is only in the nightstreets of Babylon that monsters can thrive!