This is a wonderful setting of Gershwin. As an expression of the city, Raphsody in Blue is probably the closest music can get, to put it to a cartoon like this is pure genius. 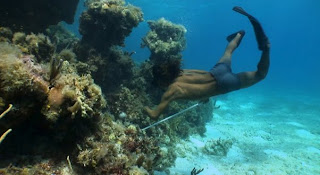 Alamar opens with two voices, it closes with a city. What fills the time in between is the dignity of cliche. Alamar is about a situation. A young man and woman meet abroad, they fall in love, marry, have a child and then fall out of love. He wishes to stay in his rural idyll. She wishes to return to her city. The child spends time with both his urban mother and his rural father. Alamar focusses upon the father. We see young Natan the son have a shower and pull on his t shirt and swiftly he heads out from Rome, where his mother lives, to the coast of Mexico where his father lives. What he finds there is enchanting. His father lives upon a house on stilts in the middle of the coral reefs. Every day he goes out fishing, diving into the coral reef and spearing lobster and crab and fish and bringing them up to the shore. His father and grandfather dive into the water, swimming underneath it into the reefs themselves (the excuse for some amazing photography). Alternately they sit upon the side of the boat reeling out lines to bait the fish, dragging them in and occasionally clubbing them on the head. This is a world in which a crocodile lives outside the front door and birds walk into the living room.

There is a point here- and its pretty obvious. It might be about male bonding and it might be about the importance of the country and sea over the City. Actually the point is a cliche- but the sea itself isn't. It is endlessly fascinating. Neither is the relationship between father and son. This is handled sensitively. The two bond on a physical level. They playfight. The father corrects the son for winding up the fishing line. The son is allowed to hawl in a fish with adult guidance. He is taught how to take his first tiny steps towards diving. He is cautioned from being eaten by a crocodile. He brings water with which the men wash the boat. Fathers and sons can bond over fishing in a way that they can't over accountancy or law. That point is obvious but the acting, the little touches are far from obvious and much more interesting than that broader point.

Ultimately a film does not have to be about much to be worthwhile. There are all sorts of other problems here: the equation of mother equals boring, father equals exciting, the idea of a community without women. It did not matter to me in the end as I was watching it. The camera loves the open spaces of the Mexican coast. It captures the sunlight shimmering across the sea. It captures the meticulous scraping of the scales off the fish carcasses, and the creation of fish stew which looks so good you can almost taste it from the back seat of the cinema (this like the famous prison dinner scene in Goodfellas is not a scene to watch when you feel hungry). We had a major debate afterwards in the party I went to if the stew was as delicious as the fried fish and tortillas which you also see being made. But its watching the stuff being catched which is extraordinary- these human bodies twisting and turning amidst shoals of fish, lobsters retreating into the coral. Ok its romanticised but still its beautiful and impressive.

I don't claim much for Alamar: apart from this that its a great vision of a life. Its about small touches between the boy and the man and the seascape around them. Its the only film I think summed up by Douglas Adams- so long Alamar and thanks for all the fish!

When I went to Oxford to study for a degree primarily about political history, we were told in our first week to read the Bible and given an exam on it at the end of Fresher's Week (while most people were making friends and getting drunk in Fresher's Week, Gracchi and his mates were sitting in the library learning Leviticus!) Christian politics is something that we all know- from Constantine to Benedict and Sarah Palin, the Church and its believers have sought to guide the state in its deliberations about what is and is not moral and what is and is not legal. Looking backwards the story of Christian interraction with politics is a fascinating one and ranges across a vast range of political possibilities, from the utopian radicalism of the Baptists in 16th Century Munster to the fierce reactionary spirit of Joseph de Maistre in 19th Century France and Russia. But there is also an equally strong tradition of Christian anti-politics: it has its roots in the Bible when Christ tells his disciples to render unto Caesar what is Caesar's, unto God what is God's.

Augustine's own views of Christian imperium are laid out in the 5th Book of the City of God. He describes the generic Christian Emperor thus:

We do not say that certain Christian Emperors were happy because they ruled for a longer time or because they died in peace and left sons behind to rule as emperors or because they subdued the enemies of the Commonwealth, or becaues they were able to avoid and supress uprisings against them by hostiel citizens. For even worshippers of demons... have deserved to receive these and other gifts and consolations of this wretched life.... Rather we say they are happy if they rule justly; if they are not lifted up by the talk of those who accord them sublime honours... but remember they are only men' (V 24)

Augustine's model of Emperor is that of a saint- a man who did not have earthly gifts but who was 'slow to punish and swift to punish' (V 24), who exhibited private Christian moral qualities. This is key to the way that he views politics- politics is a place for exhibiting private virtues. As an activity it does not actually matter: Augustine says that for the security and morals of most men it matters little 'that some men should be conquered and others conquerors' (V 17)- it does not really effect who will go to heaven and hell. The whole purpose of life is eschatalogical and not political: and the purpose of rule is to demonstrate ethical values which are directed towards salvation not to ensure security or stability. God might intervene to help the Christian Emperor, as he did Augustine says help Theodosius (V 26) but Augustine also notes that 'God removed [Christian] Jovian far more quickly than he did [pagan] Julian' (V 25).

Augustine's view of politics is that it is secondary to the chief object of human life- salvation. Politics matters on a personal level to the Emperor but Augustine is unconvinced that much changes below the imperial level (perhaps this is a product of living in a pre-welfare state society). Even when eulogising Theodosius, he comments that

These deeds and similar ones which it would take too long to recall, are the good works that Theodosius bore with him from this temporal life where the greatest of human attainments and exaltation is but smoke. The reward of these works is eternal felicity which God gives only to those who are truly Godly. All the other things in this life, be they great or small, such as the world itself, light, air, earth, fruits, the soul and body of a man himself, sensation, mind, life; all these things he bestows upon good and evil men alike. And among these things is imperial sway also of whatever scope (V 26)

Augustine offers no Christian prescription to keep a throne, makes no direct policy prescriptions save for be good and advance Christianity because ultimately these things do not matter. They are merely smoke. The thing that matters is salvation, politics is strictly secondary and may even by encouraging a lust for glory be an immoral activity. Whether the Diggers, Benedict, De Maistre and Palin agree, I'm not sure: but what this definitely represents is a relegation of politics to the second division of human concerns.