The greatness of Roger Ebert

I have a lot of time for Roger Ebert. I was just reading an article he wrote recently about his new book, Great Movies. Two passages struck me as immortal. One is about one of my favourite film makers and a man whose vision I have grown to see as one of the key ones of the twentieth century: Ingmar Bergman. He talks of coming home from his sickness, and

Soon after I returned home I turned to Bergman, who is a filmmaker for thoughtful moods. His new Criterion discs have been restored to an astonishing black and white beauty, and I fell into them. It's conventional to write of "his great cinematographer, Sven Nykvist," but my God, he is great, and I found myself trying to describe the perfection of his lighting. I responded strongly to Bergman's passion about fundamental questions of life and death, guilt, mortality, and what he regards as the silence of God. I'd seen all these films on first release, but now, at an older age, having walked through the valley, I saw them quite differently. Norman Cousins famously found during an illness that comedy helped heal him. For me, it was Bergman.

Again at the end of the essay Ebert reaches a truth about literature, film and history. He says

I believe good movies are a civilizing force. They allow us to empathize with those whose lives are different than our own. I like to say they open windows in our box of space and time.

In Shadowlands, C.S. Lewis says at one point that we read to know we are not alone. Ebert makes the point as well but its a point we all do well to remember, to have repeated again and again. Lost in the prison of our own lonely consciousness, film and books, music and history are things which can reintroduce us to a world which we lose every time we close our eyes.

The Umbrellas of Cherbourg 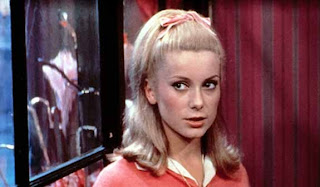 The Umbrellas of Cherbourg is notable for many reasons. It was the film in which Catherine Deneuve caught the cinematic camera and demanded its attention, an attention that neither the camera nor her audience have relaxed in during the succeeding fifty years. The start of a career of one of the great French film actresses- up there with Moreau- is something to witness. But the film is more important than that in its own respect. The director Jacques Demy was one half of France's great directorial couple- Agnes Varda, responsible for the restoration I saw today, was the other half and Demy knew what he was doing. The film is set in Cherbourg in the late 1950s and finishes in the early 1960s. It chronicles the life of two young people- Genevieve (played by Deneuve) a 16 year old (in 1957) girl who helps her mother manage an umbrella store in Cherbourg, and her lover Guy, a 20 year old car mechanic, who lives with his aunt and her nurse, Madelaine. The two are deeply in love as the film begins.

The first thing you notice about the film is not the direction or the story, but the colour. The film is suffused with primary colours, with blues and reds and yellows. Deneuve's dresses are amazing- her beauty is framed by wonderful patterns and tones. The town itself seems as though it has been put through a filter, every single stone has its own vibrancy, its own richness. The second thing you notice about the film is that everyone sings. They don't just sing the normal kinds of love songs and duets you would expect (though this for example became popular as one such song) but they sing everything. The first scene of the film takes place in a garage and the mechanic's sing to each other- sing single lines about changing the oil in a man's car or where they plan to go out that evening. Its the only film where I've seen an argument about whether dancing, theatre or cinema are better conducted by mechanics is expressed in perfect French song. At times lines are rhymed. The actor's voices were dubbed by proffessional singers. At first this irritated me, but its done on purpose. Demy wants you to take the colour, take the song and fuse it into something else. He wants you to imagine his world is the world of fairytale. When his characters say they love each other forever, they say it with the earnestness of sixteen year olds but the medium in which they sing, the colours behind them turn gaucherie into golden promises.

So much more impressive as all the promises are broken. Demy wants to present you with a picture you'll believe in, only to smash it. The iron laws of history grind over his lovers. War and pregnancy intervene. Parents urge and though no-one behaves badly or unfaithfully, love cannot be. In the world of the film, just as in Brief Encounter, tragedy is a product not of evil men or women but of evil choices. Deneuve's character becomes pregnant by Guy, he goes to Algeria, conscripted and whilst there she makes a pragmatic choice. She chooses to marry someone else: she knows Guy might not come back, she knows that her mother and her are almost destitute. Life is about pragmatism and survival not grand gestures in favour of principles that only look good drenched in song and colour. The film's position is avowedly cynical. Filmed in black and white, it would be a realist tale of disappointment and sadness: in colour and song it seems a celebration. Really it is a proclamation of pragmatism.

Ultimately as a proclamation of pragmatism, its incomplete. It leaves us watching the screen as it fades to black, the lovers are briefly reunited before obligation tears them apart. Just as in Brief Encounter, we know that they cannot be together but unlike in Lean's masterpiece where the characters wake from love, in this film they part with scorn. Guy resents Genevieve still. Genevieve's life after marriage is left to us as a blank: we can fill in the colours should we like. Pragmatism presents us with a world in which tragedy is inevitable, the product of neccessity but that it has costs. We know that one casualty is any chance of friendship between the lovers, another may be the marriage of Genevieve and her husband. We do not know and the film allows no commentary. As a statement it misses its final clause. We know the choices were rational: but the coda isn't present to tell us how they looked in retrospect.

Without retrospect we cannot ultimately judge.