So Jane Austen couldn't spell. Spelling is an odd issue. Several people today believe they have the right to regulate and to be infuriated about how others spell. For some it is testament to the march of radicalism and the end of reading itself, this is bizarre. Spelling became important in the eighteenth century when the first dictionaries were published. Grammar became important at the same time as part of an effort to latinise English, to give it a formal structure and rules. Its not true that earlier writers couldn't spell or were not interested in those rules, but many of them included varient spellings and many of them did not write in what we would consider correct grammar. Austen was apparantly one of them- Oliver Cromwell incidentally, a fine styllist, was another. The idea that this, as Heffer argues, made either of them a lesser thinker is ludicrous: Heffer himself is not that great a thinker when compared to either Austen or Cromwell. One of the worst spellers and grammarians I know is currently coming to the end of his Oxford PhD!

So what is the point of grammatical correctness? I think it has two points: one is useful, the other baleful. Curiously it is most useful in education. It is useful, for the same reasons as lists of great books, because it creates access to language. Without grammar a kid starting off her education in language and their structures has no structure to grasp. I learnt to read literature by devouring the Penguin Classics: if Penguin and Everyman are the mothers of literary autodidacts, then grammar and spelling are the fathers of linguistic autodidacts. Autodidactism is something we should encourage. The second unimpressive use for correct grammar and spelling is the use to which Heffer and Truss put it. What they are interested in is putting down others, feeling superior and generally ignoring someone else's point because of a misplaced apostrophe. Its the equivalent of school kids in a playground laughing at someone because they wear glasses, and forgetting that he or she can explain something better than they can. A reverence for form is joined here to a contempt for substance: one of the blessed things puritanism has taught me is that the latter is much more important than the former.

Who cares whether something is spelt correctly or where the commas are, so long as the ideas expressed are important or right. Simon Heffer argues that bad spelling implies someone is a bad logician and so rejects any applications he sees for a job on that basis: I'd argue that looking at someone's spelling before their logic suggests Mr Heffer needs to learn a little more about logic! 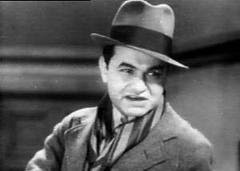 When you call your film Little Caesar, it means something. You make a statement about what your film is about. Its not about gangsters though that may be its ostensible subject, its not about America though that may its location, its not about the Chicago slums though that may be its environment, its about the world and all that is in it. Render unto Caesar what is Caesar's says the Gospel, leaving us in no doubt that what is Caesar's is the world. When Warner Brothers made Little Caesar, they made a gangster film- the type of which with Cagney and Robinson on the books that they made throughout the thirties- but like all Warner's Gangster films the film meant something. The point of the film is to describe the rise and fall of Rico, Little Caesar, as he makes his way out of the gutter and into the bigtime. His progress through the gangster organisation- from the bottom where he holds up gas stations with his friend Joe (a wannabe dancer)- to the top where he meets the big bosses and stands in their offices, dinner suit on and cigar in hand puffing smoke and talking of millions. His desire throughout this, the thing that motivates him, isn't money or girls- that motivates Joe- but is the sensation of power, is being a big shot. Rico's vulnerability is his desire to be a big shot, to be seen, spotted and in control.

That sensation is distinct from the normal attributes of success. Joe becomes a successful dancer, with a wife, but will always be at the mercy of his directors and his wife. He may be successful but he can't order people about. Rico defines success as the ability to control others. Money is almost irrelevant to that. As this article shows in today's context, you can be rich but not in control of your life or the lives of others. The life of respectability is not a life which grants power: it grants good things but not that. This desire for power is linked to Rico's egotism: Rico wants power because he sees the world as something to be mastered, not cooperated with. He desires this because his vision of the world is as a place which men and women attempt to act on, not act in. Whenever he comes up against another gangster leader he tells them that they've lost the ability to take it, though they had it to dish it out: what he means by that is that they've lost the ability to control the world, to remain impervious to it, to resist it controlling them. The only insult that works on Rico is the insult that he too has lost this ability- lost the ability to hold the world at naught. He has no morality apart from independence!

As a film made in 1931 this survives very well. Edward G. Robinson in his prime and Douglas Fairbanks junior carry the film. Robinson's performance captures Rico in all his grandeur, he snarls and moves through each scene with abandon. There have been fewer better gangster actors in the history of cinema than Robinson. The key point about Rico though is how much he is a Robinson character. If you think of the other great gangster actor- James Cagney- he could not play this part, or if he did, he would lose something that made him Cagney. Cagney always had the ballet dancer's poise- when he skips into the car in one film you can see his charisma errupt across the screen. He is the descendent of Sikes and the Dodger, the ancestor of Benny in the City of God. Robinson's character here is much darker and more introspective- the shadows of Capone hang over the performance, the performance hangs like a shadow over the Godfather and Goodfellas, over Pacino and De Niro. Robinson captures something of the reasons that a man might want to be a boss- the film is really about the creation of a boss. Robinson portrays the boss as a stoic gesture, a gesture to become independent.

As the film ends, the gangster lies sprawled on his back like a beetle in the darkness. He cries out to the audience, 'Is this the end of Rico?'. I started with a discussion of politics. One of the famous sayings of Enoch Powell was that all political careers end in failure: all 30s Gangster films had to end in failure for the gangster. Little Caesar does and does not do so: on the one hand there is Rico lying in the dark, on the other he never needed anyone to go with him. The policeman says at the end that Rico and him went on a journey together, actually he lies: Rico went his own way, his was the unsocial sociability that led him to become supreme and alone.