Its the fifth birthday of Bloggingheads. Its a wonderful resource even for those of us outside America- I love some of the diavlogues they have hosted and if you haven't listened, go over there and try something on language, science or American politics. 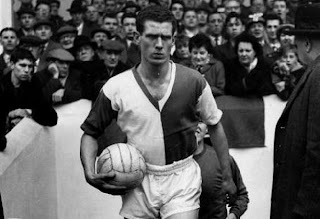 Ronnie Clayton isn't a person that people seem to have remembered. He was right half for Blackburn in the late fifties. He was captain of the England football team in that period as well, between Billy Wright and Johnny Haynes. He died recently. I don't have any connection with Clayton at all and have no idea of what type of person he was (though by all accounts he was a good man). Save for the fact that I possess his autobiography. Clayton gave it to my father when my father was a teenager in Leeds in the early 60s. I'm not sure what draws me to what Clayton writes. It is definitely a product of a different era: one of the photographs has Clayton and his wife standing in the shop that was his retirement plan. He counsels any young footballer to learn a trade for the inevitable day when he hangs his boots up. Clayton played in the era of national service teams: when conscripted footballers would play for the army in Germany and talks about how tackles in those ugly games could ruin promising careers. The world of Rooney and 500 pound a night call girls seems a long way away from Clayton's footballers in the era before the maximum wage was abolished.

Clayton's autobiography is titled 'A slave to soccer'. What's interesting about that title is the way in which Clayton interpreted it. He like many football professionals believed in constant practice, constant training. Clayton's speciality at Blackburn was long throws and he tells stories about trying to hit the cross bar with a throw from the side of the pitch. His book is filled with accounts of fellow professionals- men like Tommy Taylor and Duncan Edwards of Manchester United, Stanley Matthews of Stoke and Blackpool and so on. What he does with those pen portraits is not so much to create a sense of the celebrity filled world he lived in: but to create a sense of professionalism. Clayton saw these men as colleagues. I've been reading Max Weber recently and what Weber says about a vocation is very apt as a description of how Clayton saw football. The captain of England viewed football as a craft and saw his career within it as a process of improvement. Clayton in this sense was no different from the other aspirational kids emerging out of Preston at the same time who became lawyers, doctors or foremen in factories: his factory was football.

Clayton therefore was a normal working man. He had to put up with the poison pen letters and the accidental nature of a footballing career: but he also knew he would have to rejoin his more normal generation. So in the biography he talks about buying and running a Tobacconists in Blackburn during the time he was England Captain. When he left football he firstly became a manager- a job at which he did not excell- and then a regional manager for a firm which sold tyres. Clayton the company footballer became Clayton the company man. The point of this is not to disparage him at all: he comes across in his book as a much more pleasant individual to know than a Rooney or a Gerard. It does though throw up further questions. Clayton saw his work as any other aspirational kid from the same period saw their work: he saw it as a vocation, he was a slave to soccer. What's interesting is whether and how that has changed- the work of sociologists such as Richard Sennet suggests that that kind of tie from an employer to employee may be dying: that Weber may need updating for a more flexible world. If so its fascinating to think about how say Rooney's attitude to his work differs from that of Clayton.

The changes in work and the ways that work relates to life effect us all in two ways. Obviously they effect us directly. Less obviously, we all aware that the world has changed. Clayton for me is part of that awareness. By accident, more than perhaps superior players like Edwards, Finney, Matthews, Lofthouse or Revie, Clayton through his words defines for me the footballer of the 50s. Its a world that is prior to Busby (though Busby was a contemporary), Shankly, Revie and Clough: the figures that created the game I watched at the beggining of the nineties. More importantly though Clayton is a natural comparison for me for Rooney and Gerard. He is part of a dimly known and understood past: a place against which the present is measured. In that sense, his relationship to his craft is fascinating, Clayton thought about football as a craft and saw that even for the captain of England a career would end and a new one would have to be created after it finished. Running through his book there is an ideology though- the ideology of a vocation- I think what's fascinating about it is that that idea was not only Clayton's. As Weber argued, it was fundemental to the way that people saw themselves in capitalist society.

After writing this post, I feel slightly apologetic. Stretching a life into the span of an argument feels unfair. Taking a life as an archetype creates dangers in itself: perhaps such dangers are excusable in a blogpost but they are not in the thesis that the post expresses. Its the fate of a historian to be always looking to diminish life into its constants and making an argument from them: for that I can only apologise and hope for some absolution. Clayton is a figure who I never saw play and never met: I have read his biography several times but that is the only contact with him that I have ever had. Still I felt when he died a certain sense of loss, whether appropriate or not, that's where I would like to leave this post.