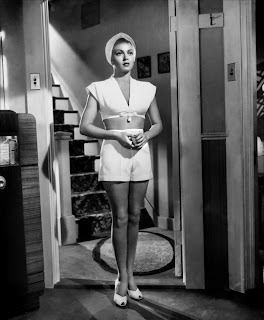 Reading a book about a story that you have seen and enjoyed on the screen is very interesting. The book brings out facets that you never realised were there. Reading 'The Postman always rings twice' several things come out of the book that are not in the film: the book was far more sexually explicit than the film, take this passage

I ripped all her clothes off. She twisted and turned slow so that they would slip out under her. Then she closed her eyes and lay back on the pillow. Her hair was falling over her shoulders in snaky curls.... She looked like the Great Grandmother of every whore in the world. The devil got his money's worth that night.

The thing though that is most noticable isn't the sex or the violence- both of which are more visible- but the story itself. Postman is about infidelity- Cora and Frank get together and then murder her husband and face the legal consequences of that. In the film this is represented as a blighted love story: in the novel things are different.

Two things are different. The first is the background of the characters. In the film they are a drifter and a wannabe star. In the book, the drifter has prison sentences in at least two if not three states. He is not so much a drifter- a happy go lucky hitcher- as a sinister petty criminal. The route from fights in bars and petty theft to murder isn't as shocking as the route from a good time boy to a killer. The girl in the book is idealist: in the novel, she was a waitress at a cheap resturant and spent 'two years of guys pinching your leg and leaving nickel tips and asking how about a little party tonight, I went on some of them parties'. Both of these characters live in the seedy margins of the law and exhibit attitudes to match: he never seems to want to work or understand what it is to work, their relationship is based on violence. Just as importantly their contempt for her husband is based on race. In the film this is never mentioned, in the novel it is explicit. Cora turns to Frank at one point and says about her having a kid with her husband 'I can't have no greasy Greek child'. This isn't the sole example of her prejudice, again the film shows nothing of this.

So what to conclude. The Postman always rings twice is a far nastier and grittier book than the film. What does this show? In my view it shows a couple of things: firstly of course how the Hays Code made Hollywood much more covert in its approach to sex and violence, Lana Turner's legs are no substitute for what the devil had Frank and Cora do that night. But also I think it shows how Hollywood at a particular point in time moved away from reality: Postman is not a realistic film and the choice to make it not realistic was conscious. The source material is realistic and gritty: racism, the seedy underworld, deception and anger are all present in ways that you do not find on the screen. The book is grounded in a reality, in a 1930s America, complete with slang, vocabulary and attitude: the film is a much more universal thing, it is less tied to a class or a place. One of the things that cinema with its universal aspiration has done through the blockbuster is create or try to create universal languages: when you watch Postman and read Postman you can see that process taking place.