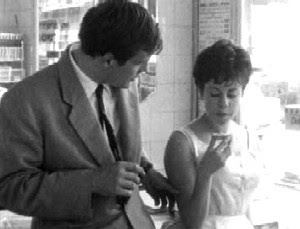 You don't need much time to say something important. A short film or a short book is often more powerful than a long one. (Sometimes this blogger needs to learn that with respect to blogposts!) Eric Rohmer's La Boulangere de Monceau fits into that pattern. The film is only 22 minutes long but it has interesting things to say about the ways that we view morality. Its a story about a lad who meets two girls, one an unnamed bakery assistant and the second Sylvie, a slim blonde on the street. The man meets Sylvie on the street. She walks through his route to university every day and he admires her from afar. Prompted by a friend, he engineers a meeting with the girl- and after a discussion, she agrees to go for a coffee with him the next time they meet. Then she vanishes. He searches for her round the district, in the markets and the streets. Eventually he ends up going regularly to a bakery where he flirts with the assistant and agrees to meet her in a cafe. However just before he does, he sees Sylvie again who broke her leg and therefore had vanished, he jilts the bakery girl and goes to dinner with Sylvie- he describes this as a moral decision.

There isn't much suspense in the film and therefore I feel no guilt about telling you the whole story. I think though what's really interesting about this is the way that our protagonist describes the whole story as a moral tale. His decision to go with Sylvie to dinner and not the bakery assistant is moral: why? There are two reasons for the decision to be moral: the first is that he is committed to Sylvie. We know however that they have only just met, there is no reason for him to be committed to her. Sure he may desire her more but that desire is not a moral judgement, its a preference. There is a second reason for the decision to be moral: the reason is retrospective. At the end of the short film, the man marries Sylvie. In retrospect, had he jilted her he would have jilted his wife. In retrospect therefore the decision is about morality when looked at from the point of view of the future. Two things are crucial in this perspective: the first being that Sylvie as opposed to the girl from the bakery is given a name by the narrator- she is an individual- the other is not. The second is that the film is narrated: the entire film is seen from the point of view of the future.

This spinning round of the moral order is important. We often see the moral moment as the moment of choice, whereas the film presents the moment which defines the morality of an action as the moment afterwards. Obviously morality is useful as a guide to how to behave. Rohmer's reminder is that morality is also a useful concept applied to the past: it is our way of understanding our history. The man here needs to rule out the alternative possibility- that he married the girl from the bakery- and he does so by creating an obligation to Sylvie. The road not taken could not be taken because it would have been immoral to have taken it. Psychologically Rohmer argues that we need to classify, to judge our pasts in order to explain and justify our presents and he only needs 22 minutes to say that.

Distance is everything in history and religion. Sounds like an odd comment? Consider the Christian Church in Ethiopia for a moment. What I'm writing is based on Diarmaird McCulloch's history of Christianity, but what McCulloch notes about Ethiopian Christianity is fascinating. It exposes the effects of distance and location on relgious thinking. There are two stories about Ethiopian conversion: Acts Chapter 8 recounts the baptism of a eunuch servant of an Ethiopian Queen in Egypt by Phillip. Our first historical account of an Ethiopian Christian regime is from the fourth century though, and here it is not from Egypt but from Syria that Ethiopian conversion was achieved. A Syrian merchant, Frumentius, is supposed to have converted Ezana, King of Aksum to the faith. Despite this its links with Egypt dominated Ethiopian religion: an Egyptian nominee was the Abun (Bishop) in the church. The Ethiopians followed the Egyptians and the Syrians into Monophysitism: the belief that the three persons of God have the same nature and substance, rather than as Chalcedonite Christians believe simply having the same substance. Ethiopia therefore was endowed with both Syriac and Egyptian roots and contacts for its Christianity and those contacts continued, however tenuous and influenced the character of its faith.

Ethiopian Christianity partook of a Red Sea and Nile world. Ethiopia was briefly connected by conquest to Yemen and definitely by trade to the rest of the Roman world. During the seventh century the conquest of Africa and the Middle East by Muhammed for Islam changed the world entirely. In Europe the Meditereanean became a frontier. In Africa the world of the red sea and Nile was no longer a link for Ethiopia to Christianity but rather a block. So much so that in the 16th Century when Jesuits from the counter reformation finally broke through the Islamic barrier, they were shocked by Ethiopian practices such as circumcission and refraining from eating Pork. The Ethiopian church developed along very different lines to the Western or Eastern Churches. In part this was natural: church designs were different to accomodate heat. But in part this was a result of the lack of cultural cross pollination: Ethiopian church music was distinct and different from that used in the Western or Eastern Church. Most significantly long after it was abandoned elsewhere by Christians, the Ethiopians were interested in the Book of Enoch- something that provoked interest in seventeenth century England of all places!

I haven't gone through everything that McCulloch says about Ethiopian Christianity and what he says, I am sure, barely scrapes the surface of what we know about that culture. What is interesting though is the way in which the Ethiopian church attests to the importance of geography in the development of Christianity. Evangelised across a trade route commonly known in antiquity and then isolated from the rest of the Christian world by Islamic conquest: Ethiopia produced its own style of Syriac/Egyptian Christianity. It produced great stories of self denial (the monk Takla Haymanot for example who stood on one leg for a considerable proportion of his lif on his cell feeding on seeds brought by birds) and great monuments but had features which we don't see elsewhere. For a start a foreign bishop meant that monks became more important. In the 15th Century the Ethiopians decided that both the Sabbath and Sunday should be days of rest. We must not overstate this- during the 15th Century Ethiopian Christians rediscovered Europe and cross pollination restarted, including the important use of a French work of devotion from the 12th Century in Ethiopian monasteries in the 15th- but the Ethiopian church's different path through the centuries suggests both the ways in which geography influences history and the ways in which there are alternative possible models of Christianity.