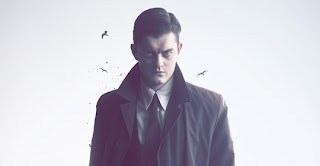 Remakes are not easy for they are shadowed by the original. This is particularly true when the film remade is a classic- like the 1947 version of Brighton Rock. The viewer has an expectation both of difference and influence. Its something I've often wondered about. In classical music or theatre we are perfectly happy with the idea that a different performance can shape a piece or a script in a different way. The fact that McKellan did Lear a couple of years ago does not mean that Jacobi can't to it today. We are more resistant in cinema. The director and the writer have become fused, so remakes have an illegitimacy to them. Consider the word for a start. Noone says that the London Philarmonic remakes Mozart, but they do exactly what Rowan Joffe has done to Brighton Rock. They take the original piece, interpret it and play it to an audience. Would it be better if we could get a screening of the first ever performance of Mozart's orchestras, is their performance the best because its the earliest? Or is this obsession with remakes in cinema just an avatar of the genre's insecurity and its immaturity?

Brighton Rock is interesting in this regard. This story has now been told directly three times. Once in a novel by Graham Greene, secondly in a film in the 1940s and thirdly in this updated version. I have reviewed the novel and the earlier film elsewhere: this third film does add a different dimension though the story is basically the same. The basic elements of Brighton Rock are here. The anti-hero Pinkie Brown has committed a murder. A waitress at a local cafe is able to incriminate him because of what she has seen: he then attempts to woo her in order to stop her so doing. His gang gets nervous and Pinkie has to deal with the nerves. And against him is ranged a determined older woman- in the book and the 1940s film she is unconnected from the main action- in this Ida is the owner of the cafe in which Rose the girl works. The set up therefore and the denoument are the same as the book and the other film. The task for the director and actors is straightforward: they have to find something else in the material and convince you that its worth watching another version of the same story. I think they do.

The obvious difference between this film and Greene's book and the earlier dramatisation is the date. Greene's work is dated in the 1930s as Brighton emerged as a centre for race horse gangs. This film is dated in the 1960s, the era of the riots of mods and rockers. It is actually dated pretty precisely to 1964: this is significant because it is the last year in which hanging was available as a punishment for murder. The dress therefore and the style of the film are different from the older version. At one point, Andrea Riseborough, playing Rose, is able to acquire a sixties short skirt: there are echoes of sexual revolution in the air and suggestions of a different future to come. Although this film like the accounts of the sixties I have heard from my parents suggest that whatever was progressive intersected with a huge society that was conservative: radicalism, Beatlemania and Harold Wilson are all off stage in this film. They are important for they make Pinkie's idealisation of the way of the gang a conservative vision, almost a reactionary vision, but they are not central to the line of the story. Setting matters because it throws into relief the curious conservatism of the main characters: but it is not key.

The real change in this film as against the book and the previous film, is that it makes the relationship the centre of the drama. The film is laconic but it appeals to our emotions: it leaves you wondering whether Pinkie ever really did love Rose and whether Rose ever really did love Pinkie, rather than wondering about Catholicism. Catholicism is brought in: but the people I went with reacted to religion by discussing its impact on the relationship rather than the relationship's importance for religion. When Pinkie tells Rose that their marriage will produce only mortal sin, we empathise with the girl's instinctive horror that this moment of moments in her life has been ruined, rather than feeling his and her feelings of sin. Perhaps this is nowhere best symbolised than when Rose goes into a church: the camera follows her face, her features, her walk rather than following the images of Mary and Christ on the wall. This is Brighton Rock the individualistic drama about Catholicism rather than the Catholic fable about individuals. Its an important shift in tone.

So Brighton Rock 2011 achieves in producing a remake that is a version of the original rather than being a faximile of the original. The important performances here come from RIley and Riseborough. He generates an air of silent menace but also one of vulnerability. Riley's Pinkie has obviously no idea of how to seduce a girl and no idea at all of sex. Riseborough similarly has no idea of how to be seduced and captures wonderfully an air of innocence- almost of mental incapacity to recognise the world. She plays the part with an exemplary touch: making you believe in this incredibly vulnerable girl without a hint of street wiseness in her make up. Because of that they are a believable couple. What's interesting about them- as opposed to Attenborough and to the book- is that they are products of a cinema that has much less time for religion as a motivation. Constantly therefore we are looking for other motivations: is Rose a disturbed and abused child who has found a substitute father, is Pinkie really in love with Rose? They are questions that the film doesn't answer: but what it provides it problematises.

I'm not sure I have any answers surrounding those questions, but this third attempt at the story of Brighton Rock appears to me to be a more feminist text than the first two. Fundementally we are being asked to understand this relationship. How free are those that enter into this coercive and frankly terrifying ensemble: is Rose coerced by Pinkie's violence, is Pinkie by his situation. Furthermore is there a sense in which they are both escaping, Rose from her family, Pinkie from the gang. The ending of the film suggests both that human life and our answers to these questions are illusions, and that a life is leant meaning by its sequel. If Rose believes that Pinkie loved her, does it matter that he was a sadistic basterd who loved noone?

How to commit treason once you are dead

Shane O'Neill died in 1567. In 1569, he attainted for high treason in the Parliament of Ireland by the Viceroy Sir Henry Sidney. Its long been a matter of interest to Irish historians that this happened: some speculate that Sidney and the crown wanted to get O'Neill's property in Ulster. A recent essay by Ciaran Brady argues that the trial was an arena for making a political point. Brady argues that the crown did not need to take O'Neill's property, instead what the act of attainder was was a complex act of political propaganda. Its long preamble asserted English perpetual sovereignty over Ireland and particularly over Ulster. Its importance was as an ideological statement of English power in Ireland and as a statement that both the native Irish and the English colonists were bound by that power. If O'Neill was a subject then he was a subject in the same way as the English colonists and so were all his Irish compatriots. The legal case was a political statement.

Its an interesting argument and Brady is probably right about Sidney's motivations. It does though make you think about the purposes of early modern and even of modern justice. Quite frequently you think of justice as a three party relationship: there is the offender, the judge and the audience outside. The offender is judged by the law to have committed a crime. The judge sentences to send a message to him and to the audience outside that crimes have consequences. The judge sends a message to the audience outside that crimes will meet with retribution: he satisfies bloodlust. What Brady shows is that there may be another dimension to a crime or a criminal trial: a trial establishes what is true and what is legal. So for example I may want as the state to demonstrate that Irishmen are subjects to the English Crown, thus I pass an Irish act of Parliament to assert that Irishmen can commit treason in the same way as the English.

To come to my title, the point is that O'Neill actually didn't do anything to commit treason. Rather than thinking about his punishment (the disinheritance of his heirs) as a punishment, its worth thinking about it as an argument. John Austin famously argued that all speeches or arguments were acts: Austin was right but what the case of Shane O'Neill reveals is that many acts are actually arguments.