A question of ego

Those were times when, to forget an evil world, grammarians took pleasure in abstruse questions. I was told that in that period, for fifteen days and fifteen nights, the rhetoricians Gabundus and Terentius argued on the vocative of 'ego', and in the end they attacked each other with weapons. (Brother William to Adso, Umberto Eco 'The name of the rose')

One of the enlightening moments of my undergraduate degree came in a tutorial on Edward Gibbon. We were discussing why Gibbon had written 'The Decline and Fall of the Roman Empire' and myself and the other students exchanged ideas about Gibbon's intentions to reshape the enlightenment, argue with Machiavelli, discredit Christianity or explain the course of history. Our tutor leant back on his chair and asked us why we didn't just beleive Gibbon's own explanation: that sitting on the Capitol Hill he had heard the monks singing above the ruins of the empire and decided that this was the subject that should consume his lifetime's energy. That explanation did not satisfy me at the time: I left the tutorial with a friend we both agreed that there must be a better more intellectual explanation. Over the years though, I've come to reject our view and embrace the view of our tutor.

Part of the reason that people do intellectual things- whether its write a history of Rome's decline and fall or whether its a philosophical essay because they enjoy doing it. That sounds pretty simple as an account of why people do things, but it can't be neglected as a description because it ties to a vital question in intellectual history. Intellectual history increasingly focusses, following Quentin Skinner's lead, on the reasons that a book is written. If you write something- you want to contribute to some debate, your argument is to be evaluated in that light. Of course Skinner is right and his method has become very fertile as a way of reinterpreting and understanding better the thinkers of the past. I don't think we can leave out the 'enjoyment factor' from our analysis. Hobbes did not just write Leviathan to answer an authority crisis or a de facto debate during the English Civil War, he wrote it because he enjoyed that particular form of argument. In some sense, Hobbes found the experience of writing the book both enlivening and inspiring and hence he wrote it.

Lets come back to the citation at the front of this post. Imagine you are a historian and you ask why did Terentius and Gabundus argue about the word 'ego' at that point: were they responding to a grammatical crisis in Latin? William's description implies that no they were not, they did this because they sought to drive out the evil and terrible events of their own lives. They responded to their immediate situation. One might say that Leviathan was written less because of a political crisis in 1650 and more because Hobbes was bored or was particularly interested in politics at that point in time. Reintroducing a work to its immediate context is a fair thing to do, but we must be sure that we do not imagine that works are written because of their contexts. Terentius and Gabundus argued about ego because they used a language which contained the word and had a vocative tense: they argued at that particular point in their lives because they wanted to drive other thoughts away from their consciences. 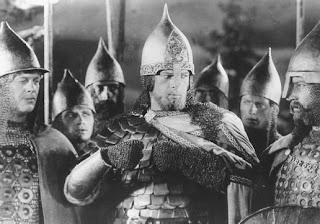 Watch Alexander Nevsky and you can't stop noticing the fact that this is both a film and propaganda. Produced in 1938, it was swiftly removed from Soviet film theatres later that year when the Nazi-Soviet pact was signed. It returned to them in 1941 following the German invasion of Russia. The film concentrates on the story of Alexander Nevsky, a historical Prince of Vladimir, who fought the Teutonic Knights in the 1240s. The film deals with this subject by bringing together several battles into one great confrontation: on the one side is Nevsky, on the other the Knights. The first hour of the film constructs the confrontation between Nevsky and the Knights, the second half of the film reveals the battle between the two forces and the outcome of that battle- whose implications are quite clearly meant to reverbrate down the centuries to the atmosphere of 1941. This film attempts to make statements about the way that history works and the ways in which it intersects with class, nationality and religion: the way that events are shaped by those forces and by the force of the charisma of a single individual.

Writing a review of propaganda is not easy. This film is nationalistic, anti-religious, possibly anti-semitic, definitely prejudiced against the wealthy and jingoistic. It is a Stalinist production and relates to that period within the history of the Soviet Union when Communism became a nationalistic creed. One can admire the artistry. There are shots of genius in this film. There are shots of amazing beauty which still stun the eye today. Some of the photography across the icefields of Northern Russia is sublime. A shot of skulls in the snow after a great battle is stark but sums up in one image the desolation of death. All the way through the film you can see the way that it has influenced modern cinema. It is impossible to film snow or ice without thinking about Nevsky. It is impossible to film a battle sequence without (consciously or unconsciously) referring to the great battle with which this film culminates. Eisenstein made propaganda but he encased the Stalinist offal in chocolate: the film should come with a warning- dwell on the edge and taste the sweetness, bite too far in and rotten juices from the meat flow into your mouth.

The ideas of the film- the offal- is interesting because of what they tell us about Soviet communism. THe key moment in the film rhetorically is when Nevsky summons the Peasants from around Novgorod to defend Russia. When they arrive, they and the poor townsmen help defend Russia with an innate sense of Russianness and a wisdom based on proverbs about hares and foxed. Nevsky himself seems to operate best in this milieu. For Communism, an industrialising creed, this might seem strange but it testifies to the ways in which, as Orlando Figes and others have described, the Communist regime became nationalistic. Consequently although Catholicism is condemned and one of the 'traitors' is made to look Jewish, orthodoxy is not questioned. The film supports a project which says that at its core Russia is Russian and truth springs from the people of Russia, in particular the peasants of Russia. This reading of the film suggests that it is Stalinist but also that Stalinism can be seen as changing through the medium of its own propaganda.

It is difficult to review a film which does mask such dark ideas. I have not done Nevsky justice in these reflections nor have I found a real theme to hang this review upon. I think though it is a film worth seeing- mainly for its artistry and imagery. Its ideas are interesting but I found them too linked with the totalitarian regime that inspired the film to be satisfying. Ultimately they are the beast, the cinematography is the beauty.