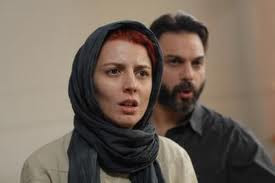 Often people look at divorce or break up and they see that one side or the other are to blame. They argue that somebody must accept moral culpability and I'm sure that in many cases there is a party that is to blame, there is someone who should be accountable. That is not the case in all cases. The Iranian film, A Separation, brings that home very powerfully. It concerns a couple living in Tehran. The woman wants to leave Iran, the man wants to stay to look after his senile father. Their daughter chooses to stay with the father rather than the wife. They separate- the wife lives with her parents for a while, the man in their flat. He employs someone, another woman, to come and look after his father for him. The conflicts that this creates- between the husband and wife and the woman who cleans for them- are the force which runs through the film. The conflict that arrises between the middle class couple and their cleaner is a conflict overlaid with Iranian politics and history, its about an accident which happens when the man in justifiable anger pushes the cleaner. As the crisis happens, the relationship between the husband and wife is put under hideous strain: they struggle with their different opinions, both justified, of what the best strategy is.

Some have seen in this story a political allegory. Nader the man is the Iranian reformists who try to confront the regime, his wife Simin represents Westerners fleeing the country, Nader's father stands for Iran herself- grand and helpless, the cleaner and her husband stand for the devout masses who have in their pain elevated the fanatics and thugs who currently rule. I can see the argument but find the point is too blunt. I think that actually the political point here is much more interesting and universal. This is a film that reaffirms that as humans we face moral dilemmas which are as true in Tehran and Isfahan as they are in Texas. The dilemmas in the case here exist whether you like it or not. The film investigates whether you are ever truly accountable for the acts you commit: how accountable should you be for the results of an action whose import you did not at that moment understand. If I kick a pregnant woman and she suffers a miscarriage- have I committed a murder and should I be tried for murder? The film leaves this question unanswered- but one can see the justice each way. Moral questions are not simply resolved into yes or no answers, they take thought and feeling. Equally we are confronted with the consequences of the law: what is the law- a system to punish bad behaviour or to create good social outcomes. What does punishment acheive if there was no intention and if it merely wrecks lives and leaves them destroyed without restoring anything of what was lost?

These questions run through the film but alongside them runs another one. We all face situations in our lives and have choices to make. We may call the placing of us in those situations providence or fate or fortune but it comes to the same thing: human beings cannot control the context for their actions, all they control is their response to that context. Nader and Simin therefore stand at opposite poles with respect to how they respond to their situation. He believes in right and wrong- he does not believe he pushed the pregnant woman and therefore killed her unborn child, he does not believe he should desert his father. She beleives in accomodating: even if he was not guilty, wouldn't it be easier to pay off the other family rather than accept the potential dangers of a trial. His father is ill- but then his father can barely recognise him and for the sake of their daughter wouldn't it be easier to leave Iran. These two responses are both valid responses to human events: the first set of responses needs no defence- the second set of responses are those of a pragmatist and therefore are reasonable in themselves (there is such a thing as selfish idealism- particularly when a child is involved). There is no way though of adjudicating between them- nor is there a way of arguing between them.

Ultimately this brings me to what I found most intriguing about the film. Because if we accept that the conflict running through it- between compromise and assertion- is a real conflict and an insoluble conflict then at last we can see the tragedy of Nader and Simin's marriage. They obviously love each other- obviously care for each other and they both tenderly care for their daughter. Yet in this situation these two human beings cannot share their lives- every time a strategic decision has to be made, their paths divert. The film's title is very apt- this is not a film about injustice or a response to injustice- it is a film about the pain of separation. The pain is worst for their daughter, played amazingly by a wonderful child actress, who captures the pain and courage of a precocious 12 year old facing these disasters. It is real pain though and one struggles to imagine how this relationship could not split apart. The film in that sense puts on screen something that I think is really important: it shows how sometimes relationships cannot survive, not because anyone is culpable, but just because these characters cannot find a way to compromise between their approaches to the world.