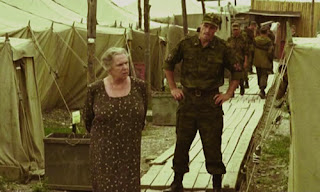 Films often remind me of other works of art- poetry, novels or paintings. Alexandra, a film by the Russian director Alexandr Sokurov, reminds me of nothing more than a painting, a still. An old woman visits her grandson fighting in the Second Chechen war. Her eyes become our eyes looking in on the life of the camp and on the relationship between grandmother and grandson. They enable us to understand the nature of what it is to be a soldier in the 21st Century in particular conflict. Like a painting, the film does not explore the 'before' or 'after', the tragic history of colonialism and terrorism that has brought Russia into Chechnya and Chechnya into Russia: rather like a painting it provides a still of what life has to offer for the soldier on the front line from the civilian perspective.

The first thing you notice about the film is the heat. Sitting in the British Film Institute, watching the film, all I could think about was how much I required a glass of water. Characters, especially our grandmother are continuously complaining about the heat. Beads of sweat run down the heads of the young soldiers. The dust is ever present and the barren land reinforces the image of heat. Within the camp, the world is sterile, metallic and dusty. Sand and fire are the materials of a particular type of nightmare: there are no trees here and I immediately thought of the science fiction horror of Visitor to a Museum as a natural counterpart. There is something of hell in every military barracks.

Alexandra comes into the barracks and meets the troops and her own grandson. Two things immediately strike you: the first is that this is a world of young men without any women- old or young. The young men behave as any young men do: but you can see they are bored. They are condemned to wait in the dust for whatever is coming next. Furthermore their boredom is bleak. Alexandra's grandson tells her that he will never marry: firstly because he knows that marriage in his own family has turned to disaster (a comment by Sokurov on Russian marriage as a whole) and secondly implicitly because he knows he will die in Chechnya. So he makes do with a succession of girlfriends from St Petersburg. The barracks has removed him and his fellows from the civilisation of their contemporaries- and plunged them into a strange half light, bored they wait for a bomb at the side of the road or to be ordered into committing an atrocity.

We follow Alexandra discussing with her grandson their own family and we glimpse the loss from the other direction. Having lost her own husband, living in loneliness and confronting her own mortality the old woman wants and requires companionship. As the light dims, she wants to see her family- war has taken this as it takes all other things away. As she departs on the train to the north, the viewer of the film knows both that this is the last time that grandson and grandmother will ever meet, and that this is a tragedy.

Sokurov never comments directly on the war itself- but affords us one last glimpse of the tragedy that it embodies. Alexandra leaves the camp and goes to a market one day: she meets there a Chechen woman and goes back with the Chechen woman to her house and has tea. The ties that bind are more powerful in this case than the division of war and nationality: so Alexandra relates to the Chechen woman who comes to bid her farewell at the station and her son whose political protests she treats with patient, stoic, grandmotherly practicality.

Sokurov never tells us that the war is unjust, never says that Russia should not be fighting it. He just shows us the cost of the war. A viewer inclined to optimism might say that the last exchanges show that war should never happen. A viewer inclined to pessimism might say that wars like the poor are things that we always have with us. The gods play dice and make us their sport- despite the cost to us all and there is nothing we can to stop the roll of the die. Sokurov allows us to understand the costs and pity the individuals who bear them: perhaps that is all that we can do.