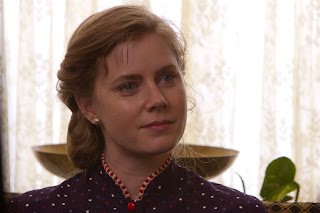 I saw the Master a couple of weeks ago and tried to review it then but couldn't find the words. I'm not sure I can find them now. I was deeply impressed by the film. Images from it keep returning to me during the day and the night. They are not pleasant images. The Master was not a pleasant film. They are not scary either. They neither terrify nor appall. There is no hideous injustice in the film. There is nothing that cries out to the viewer as a deed that must be avenged. Rather the sense I've got- the enduring sense I've got- is of a very strange world. The world of the Master- the world of religious indoctrination- is weird. It could turn unpleasant very easily and there are plenty of hints in the film to suggest how that might happen. It could turn unreasonable. Ultimately though in this film it is not unpleasant- it is just strange.

The Master is a film about a science fiction writer in the states who founds a religious cult. That's what the publicity rightly says. Its also a film about a soldier returning post World War Two to find his place in society. It is also a film about how men sublimate the desire for sex into religion. It also might be a film about how followers can become even more zealous than their religious masters. I think though more than anything its a film about the 1950s in America. There is something in it that reminds me of Pleasantville- the film in which two modern teenage kids- Reese Witherspoon and Tobey Maguire- find themselves in the midst of a Happy Days like sitcom and proceed to wreak sexual and psychological havoc. It reminded me of Pleasantville because of the same sense of restraint and violence.

The Master is about a man who returns from war, damaged. He returns to a world in which all he basically wants is sex. Joaquin Phoenix's character is not very pleasant: he is positively unpleasant. He'll sleep with anything- even piled sand on a beach and kill for kicks. What restrains him is the fact that he finds religion. Under the tutelage of the Master, he sublimates his violence and his sexual anger into the practice of religious dogma, the dance of cultic movement. Within the group, he is seen as dangerous- the Master's daughter wants to sleep with him, the Master's wife wants him expelled and in a curious way, both are sensing the same thing: he represents the possibility of change and of disruption, of violence. The Master feels that the real test of his repressive system is whether it can cope with this ultimate explosion of the human unconsciousness- in a sense the film deals with the fundemental question of the fifties, how does one repress the memory of war and the difficulty of desire?

Perhaps that's why my favourite character in the whole film is neither of the male protagonists but Amy Adams's wife of the Master. It is because she incarnates the double sense of the film- this masterpiece of repression and desire. She will permit her husband to have affairs, to do anything, so long as the religious movement survives- and she will turn on anyone who in any way damages that survival. Its a fantastic piece of acting- never has a fanatic been brought to screen with such tender ferociousness. Amy Adams both smiles tenderly and stabs at the same time. Its a terribly horrifying display of what repression is. I was wrong the Master is terrifying: its all in Adams's smile.

What's the purpose of writing history? Some people might say "to tell the truth" and that's a perfectly reasonable response- its there in one of the first history books when Herodotus talks about making sure that the deeds of Greeks and Barbarians are not forgotten. Some more postmodern people might talk about writing different narratives of the past and that's legitimate too: whether its women's history or black history or the history of the poor, that kind of history has added a lot to our understanding. We don't write history from the perspective of white men anymore and that's all to the good: we are more sensitive to the fact that there are other stories about the past that need to be read and written. These two modern senses of history though don't really help us understand why someone would write a history about someone who was a King but who they believed almost certainly never existed. Such a history isn't true but nor does it rescue some marginalised group from the margins- so why would you write it?

I can see your raised eyebrow right now- why Gracchi are you asking that kind of question. I'm asking it because it gets right to the heart of something I find fascinating about ancient historians- because they did write that kind of history. Take Plutarch. I'm currently reading his life of Theseus. Early on he admits that to write a life of Theseus goes beyond the 'solid foundation of fact'. He promises his readers that he will attempt to purify fable and 'make her submit to reason' but he acknowledges that she may defy him and he may not be able to tame her. (The verbs are lovely- the historian here is male, the myth is female and the language is that of 'submit' and 'defies'. Let me stick to my task though and not wonder off into an excursus on Plutarch's sexism!) The question therefore remains why should he write such a life?

Plutarch is quite coy. Firstly it must be said he does accept that something around Theseus's life is probably true. At the end of the life for example he talks about Cimon's discovery of the bones of Theseus and his restitution of them to Athens and talks about Theseus's qualities as a King- his ability for example to help the poor as though these were real things. But I think something else is going on here.

Plutarch's history is being used in a two different senses. Firstly he wants to tell the story of Theseus because he thinks Theseus was an admirable man- in that sense Theseus's life is one of instruction and he takes moments in the life to compare between Theseus and other politicians. For example he suggests that Theseus thought of Hercules like Themistocles later thought about Miltiades: Plutarch sees some aspects of politics as universal through time- a key difference to a modern historian who would stress discontinuity rather than continuity. Amongst those continuities is the continuity that Plutarch sees in a state. So Plutarch's lives are mapping out the histories of Athens and Rome- by addressing Theseus as well as Romulus Plutarch maps out a continuity in the city's characters. In both cases, the continuity means that the myth doesn't have to be true- it is the universal quality that has to be true. Plutarch is using his history to explore the nature of Athens and the nature of envy, and the key issue is whether he is right about them- his story is just an illustration.

Enlightenment Economics and the US constitution

What did the writers of the US constitution think about the major issues of economic policy? The question has a vital political importance in America because it is tied to an argument about the legitimate sources of law. Some judges and scholars argue that the original writers' interpretation of the text that they wrote must take precedence over any later interpretation: consequently they argue Americans should refer to the past in thinking about their institutions. I'm not interested in that argument today. What I am interested in is another argument- which is what did the writers of the constitution actually think about economics.

Renee Lettow Lerner has written an exceedingly short article in the Harvard Journal of Law and Public Policy on exactly this issue. She basically argues that in the eighteenth century Europeans in general were moving from one theory of economics- in which national wealth was crucial and mercantilism was axiomatic- to another in which the free market promoted the wealth of all. She sees Adam Smith as the crucial influence in this movement and argues that British power rested on a swift adaptation of Smith's ideas. Furthermore she suggests that the framers of the US constitution came to their task with a copy of Smith in one hand and a draft in the other. She argues that luckily Benjamin Franklin and Thomas Jefferson were away from Philadelphia and consequently the framers were able to draft a Smithian document.

Professor Lerner's characterisation of European history is a caricature at the least. There were plenty of people in Europe in 1800 who did not believe in the free market- plenty who held to Rousseauian ideals of Republican liberty as opposed to Smith's view of a self sustaining market. This caricature is not the centre of her argument though: that revolves around the individuals at Philadelphia. It is significant that Professor Lettow cites almost no historians of the political thought of the period- no John Pocock, no Bernard Bailyn, no Gordon Wood. Although she derides Jefferson as an agrarian, she fails to mention that many of his attitudes were shared by others at the convention: James Maddison for example derided paper money and despaired of easy credit. For many Americans, Machiavelli and Cicero were as key to the revolution as Locke and Hobbes.

Professor Lerner's views are obviously part of a current legal argument- and in that argument I have no stake. However there is a historical question as well as a legal question at the heart of this argument. The historical question is did the people who framed and the people who ratified the US constitution (the people who granted it authority were those who ratified it, not those who framed it!)- did those people believe universally in the economics of Adam Smith. Given that so many of them believed in a different kind of economics and elected an agrarian (to use Lerner's words- I would prefer Republican) Thomas Jefferson as President 13 years later- I think that case is uncertain to say the least.