12 year a slave: views of Washington

After seeing the film, 12 years a slave, I went away and read the book by Solomon Northup, published in 1853 on which the film is based. There are numerous features which aren't in the film but are in the book. One that I thought was really interesting was that the film doesn't make explicit some of the things that Northup says. Northup is very keen to bring out the hypocrisy of the Washington establishment: for example, he talks of Washington, and says of the house that he was imprisoned in


Strange as it may seem, within plain sight of this same house, looking down from its commanding height upon it, was the Capitol. The voices of patriotic representatives boasting of freedom and equality and the rattling of the poor slave's chains, almost commingled. A slave pen within the very shadow of the Capitol.

We can support Solomon's insight with other sources. Solomon also mentions a time when the ships sailed bearing him south, as they passed Mount Vernon, the White Men bared their heads to the memory of George Washington, whether the black slaves did is left to us to imagine.

There were probably good artistic reasons to leave these things out. Slavery is not a live political issue today- but I think they also demonstrate the change of genre that the film represents as opposed to the book. The Book is quite clearly a political polemic: its saying, look America is the land of the free and Washington fought for justice for all- look at how you don't do this. The film is talking about the suffering of the slaves in the past- a suffering that thanks to the sacrifice of US citizens (both black and white) has passed. I can imagine reading the book in 1853 would have been a completely different experience to how we see the film in 2014: the latter is a shocking artefact, the former something more akin to reading about an atrocity today. Our responses are different therefore: the book is trying to rouse anger, the film, understanding and regret. The book fights against actual southerners who believed in slavery, the film against forgetting the suffering.

Slavery is a big word. It is a horrific word, one that sums up a horrific reality in which the fortunes of a few were made with the sinews of the many. Its a concept that has been central to European thought since at least Aristotle and the fear of becoming a slave haunts the imagination of most European republican thinkers. Of course slavery became most famous on the western shores of the Atlantic, in the southern United States. I would be surprised if anyone now thought that slavery was in any way justified: the days in which a Calhoun or Alexander Stephens might fulminate on the floor of the senate in support of natural slavery are thankfully long gone. So why does the world need a new film which focuses on slavery and which retells the story of Solomon Northup, a kidnapped slave from the north who was brought to work on the cotton fields of the south for 12 long years? It is a question that some people have asked: I think they are wrong.

Slavery is a word that gets used a lot. Politicians talk about slavery all the time, comparing in America and Britain various political initiatives from their opponents to slavery. We have almost emptied slavery of its reality: it didn't look or feel like Obamacare, I could use other examples but am wary of going round the internet to find them. 12 years a slave brings you face to face with a reconstruction of what slavery might have been like. Based, fairly accurately on the life story of Northup, it doesn't spare any of the brutality. Once he is kidnapped, Northup gets beaten for claiming his real name. On the fields, he gets lashed by overseers and sadistic masters. He gets beaten and attacked by others. Perhaps the violence is not really the shocking element of the film: more its the sign of slaves being stripped down as their masters treat them and talk about them like cattle or horses, beasts whose muscles may be praised rather than humans whose feelings must be respected. (Of course, although the violence seers the screen, the director didn't portray as much as is in the memoir!)

Slavery in this context doesn't just mean theoretical subjugation, it means the real deprivation of freedom. Northup the slave may work even for a benevolent master such as Mr Ford, but when that master decides to sell him, his life is at that master's whim. This is particularly illustrated by the case of Eliza- a fellow slave of Northup in the early part of the film. She became the mistress of her master (as we can see later in the film this was not neccessarily a voluntary relationship): having born him a child, when he dies, she was flung out of his house by his wife and daughter. She was sold into slavery: and her children were sold separately so that Eliza spends most of the early part of the film weeping her loss. It is agonising to watch this innocent woman bewail her loss, a loss that she did not in any way deserve. Slavery reckoned a mother's love as less important than her children's price.

I think there is a real moral point in this film and its one that we should think about ourselves. Slavery reduced people to goods. Solomon forever as a slave is shown not speaking, a silent presence on the stage of history. He can't write- save for in blackberry juice. Only when he meets an abolitionist can his words get north. Without writing, without honest speech, he loses family and name- all the coordinates of his existence. He and his fellow slaves have become mere property. Save of course for the fact that they are not. This is nowhere more ironically portrayed than in the relationship of masters to slave girls: Patsey a young slave girl (amazingly played by Lupita Nyong'o) is treated as an economic asset, a piece of sexual meat and a threat but never as a person by her master. Only Northup treats her thus, by refusing to help her commit suicide. This is part of the fundamental immorality of slavery: 12 years a slave captures this on screen.

This lack of personhood is written through everyday life, it runs through it. So for example when Solomon for a trivial episode is hung by the neck, kids play around his body. McQueen captures the pettiness of the entire system, the bullying songs that were sung in the South, the environment in which slavery took place. The horror is partly the normality: a normality that has everything for a human apart from their humanity. At one point in the film, a slave owner lashes a slave: he responds to a question by telling the questioner that there is no sin in owning property. For him the fact that human beings have become property empties them of their humanity: he can enjoy ridiculing it, he can enjoy sexualising it, brutalising it, battering it, working it into the ground but it can never assert itself.

Perhaps one of the greatest horrors we have as human beings is to be treated not as beings but as things... if so then that's what slavery was in part about and that's what I found this film captured.

All is lost: a film without a character 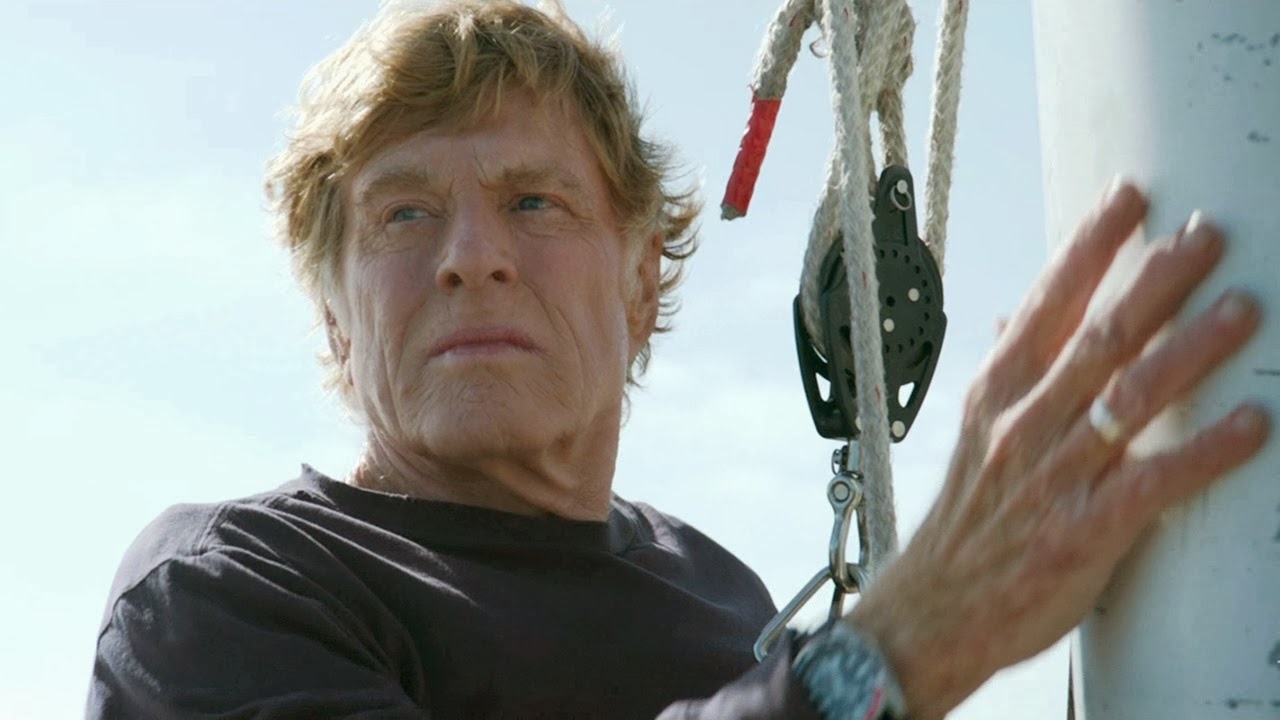 If so, then he is a pretty odd character. Character means choice. I am who I am because I chose to eat satsumas rather than grapes, prefer Leeds United to Manchester United, like talking about politics. Do you notice something about those three things: they are all positive choices. I am not forced into any of them. Freedom is in a sense a condition of character because its the space in which character can evolve- that's why Auden's lines about a 'million boots' in line make us cringe- human beings have become mechanisms. In all is lost, Redford's man doesn't make a single decision: all his decisions are merely expedients to survive- they are the decision of a man to cling on to an overhanging rock when teetering on the brink of a drop. They don't offer anything that we can comprehend in terms of character: you can't say anything about what this character loves or likes- you can say he is a fighter and he endures- you cannot say though why he fights or endures.

Equally the thing he fights does not have a character. Nature threatens Redford but there is no sense that it cares. The film moves us away from comforting myths of providence: there are no reasons for Redford to suffer and we can't invent any because we know nothing of him. Nature just is. It buffets him with waves and rewards him with sunshine. Sharks look at him with a greedy eye. Fish pass underneath him, without curiosity. The man is abandoned as the film makes clear against the vastness of the great Pacific ocean and the ocean has no interest in whether he survives or not. If Redford is reacting, he is reacting against forces he does not understand or control- against forces who have no ultimate goal as far as he is concerned at all. He is alone against them because they do not share any companionship with him at all. In that sense Redford's fight is characterless because he cannot respond save by resisting.

I am unsurprised that the Oscar academy didn't know what to do with this picture: Redford's performance is monumental and he deserves the best actor as much as the other nominees (I hasten to add I've only seen American Hustle of the other films) but its not a performance which is easy to categorise or understand. Redford only has a couple of lines of dialogue. The film has no easy message- it isn't about the environment nor the triumph of the human spirit. If anything its about the lack of location of that spirit, the strangeness of the world and its lack of recognition of these hairless bipeds within it. That's a hard message to give an oscar to, but its a rewarding insight into our condition.