Augustine at the beggining of book V of the City of God develops a distinction, upon which he suggests rests the truth of his entire theology. The distinction is threefold. On the one hand you have chance, on the other fate and between the two you have providence. Augustine establishes what he means through simple definitions: 'things happen by chance when they have no cause or no cause arising from a rational order, and by 'fate' when they come about not by the will of God or men, but as a result of neccessary sequence'. (V I) Augustine does not take much time to refute the idea that things might happen by chance, instead he moves swiftly into rejecting the argument that the world is moved by fate. Fate in this context he describes as 'the force exerted by the position of the stars when anyone is born or conceived' (V I). Augustine's argument thus turns quickly to an assault on astrology as an enemy of theology. Augustine's book therefore turns speedily into a study of causation.

What we have seen so far in the City of God is history as a weapon, used in righteous anger, by the Christian against the pagans. Augustine now though moves back to considering history as a mechanism for justifying faith. God is God because he operates in time through providence. By subjecting astrology to remorseless attacks. He subjects, for instance, the idea that twins are similar because of their stars to the counter argument that they are similar because of environment (V 2) and that there are many twins (Jacob and Esau) who are dissimilar (V 4). Augustine's anger is motivated by the thought that a position on time which involves fate rules out the Christian vision of time as one in which God's providence plays itself out. This centering of providence in Augustine's vision of the divine government of the world is the means with which he is able to make sense of God's supremacy. An act of fate or a belief in astrology is an act of treason to God.

Why is this important? It is important for two reasons: firstly because providence was central to Augustine's Christianity, without believing that God controlled time and human developments in time he argued that you would be an atheist. Secondly it is important because for Augustine the major threat from materialism was not whatever we deem to be modern science, but was astrology- this reminds us or reminded me of the ways in which astrology has developed separately to science but started from the same areas. 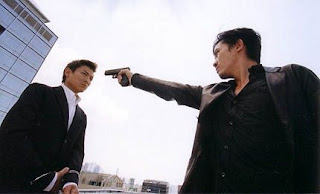 The worst of the Eight Hells is called Continuous Hell. It has the meaning of Continuous Suffering. Thus the name. (The Buddha)

This quote is the first thing that confronts the viewer watching infernal affairs, it is also the last thing that the film leaves him with. Infernal Affairs appears a straightforward cop drama, from the school that brought you Donnie Brasko. An undercover cop goes into the triads and a gangster moll goes into the police force. Both work their way through the organisations to the very top and then confront each other through a series of drug heists which end with the deaths of many policemen and gangsters. The convoluted nature of the plot is intrinsic to the suspense within the film- it is not neccessarily intrinsic to the points that the film makes. Infernal Affairs is a thriller and you can watch it as one- but it is also a piece that has an ideological point to make- it is a thriller and more than a thriller. As one review put it the film plays its plot with a straight bat and a straight face: what that review missed is that the reason the film does that is because it wants to say something about the world and about power.

At the beggining of the film we see a gangster boss telling some young men that they will go undercover in the police department for him. Sam finishes off by quoting an aphorism 'What thousands must die so that Caesar may become great'. In his view, he is Caesar and they are each one of the many thousands whose lives must be put in danger for him to create an empire. The rest of the film is in part a commentary on those words: Sam does not succeed in becoming great but others do through the application of that aphorism. They climb a ladder of corpses to the top. In a sense that is what both moles do. In a deeper sense Sam's failure to become the great gangster boss is caused because of his naive faith in human nature: he believes that all his subordinates will work with or for him, rather than seeking their own interest. Caesar was always watchful, Sam is not. But power is created by vicious violence and a disregard for others.

A second theme through the film is the police mole's wife's novel. She writes a novel but cannot work out whether the main character is good or bad. This concerns her. Good and bad are themes that run through the film: giving some characters legitimacy and others none. But as the policeman's wife's dilemma indicates, it is not so much good and bad actions that count for creating legitimacy in novels or real life, but good and bad characters. That is a matter of perception. Throughout the film, the gangster's mole in the police is in a better position than the policemen's mole in the gangsters because people believe him to be good. His power and power within the film come through the impression of legitimacy. A key weakness in Sam's power is that he is perceived to be bad. However promising a route to the top the Triads are, they are always vulnerable because of the perception in the wider community that to be a gangster is not good.

Power and its acquisition are central themes in the film. We are looking at the evolution of two structures the police and the gangsters and their relations to wider society. We see how viciousness cloaked by legitimacy is the way to the top. However, this doesn't marry very well with the proverb over the film. The proverb could be taken to describe the condition in which the policeman and the gangster live whilst being undercover. Both find the undercover role a difficult one to play: the undercover policeman because he desires to get out of the gangster world, the undercover gangster because he likes his modern apartment, pretty wife and prestigious job. I think though that it is not meant only to describe the nature of being undercover: the proverb also describes the moral of the film. I have described the acquisition of power- but Buddha describes the ends of power, the condition of power.

This film is not gentle to those who hold power. They must like Caesar be watchful for traitors. Moreover they must climb through corpses to a throne. Perhaps even further, they wreck relationships: the undercover gangster's relationship with his wife is imperrilled by the end of the film. They also live with a mark of Cain upon them. For a film so fascinated with power, Infernal Affairs is ultimately repulsed by power. Its argument is that power is in a sense hell: neither Sam nor the superintendent enjoys their power and for both it is a cause of their downfall. They both have to rely upon subordinates who have their own motivations. The only route from the top is down. But in another sense, you get the impression from the film that the heads of the powerful rest uneasily. The blood is in their fingernails and will not wash out: thus amongst the final frames of the film is a flashback to the admiration of the winner for the loser.

Buddha's proverb is central to this film and makes a deeply political film, deeply apolitical. The argument is the film is against the structures that it itself describes. If you must be Machiavellian to acheive political greatness, then is it worth it. In A Man for all Seasons, Sir Thomas More asks Richard Rich what value a man's soul has, the Attorney Generalship of Wales, the Chief Inspectorship of a Hong Kong police force. Infernal Affairs asks the same rhetorical question and has the same understood answer.