The Eccentricities of a Blonde Haired Girl 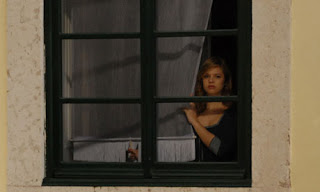 What are the eccentricities of this blonde haired girl? You'll spend 60 minutes of this fine film trying to find out what her eccentricities actually are, before you realise her real eccentricity is that she doesn't exist. This isn't some Lynchian nightmare in which a character actually doesn't exist- the blonde haired girl is there (see the picture above) but she lies behind a curtain, she gestures from a window, she does not actually exist. The film is about a man who wants to turn his life to pivot upon her existance. He is an accountant, commerce dislikes him because he is sentimental, but he seems to be able to hold down a job in his uncle's Lisbon shop. Across the road he spies the girl- we later learn she is called Luisa but her name is basically irrelevant- and he falls in love with her, her and her Chinese fan. He then proceeds to win her heart, surprisingly easily, but in order to marry he must find money. His uncle won't support him so he goes to Cape Verde to raise funds. I'll stop telling the story there- there is more to tell but you know everything you need to know until the final twist (the moment when you realise the girl until then has not existed).

The entire story is told by the main male character in a train to a woman. So we only see the girl through his eyes. She is sexy in a Bardot way, large lips, a come hither glance over a fan etc etc but we don't ever learn about what she likes or who she is. She isn't anyone and likes nothing save to be observed- that's what you'd infer from the accountant's tale. He on the other hand behaves like some medieval knight, he asks his uncle for her hand, he lives in penury and suffers for her, he idealises her favour, he can't even speak to her before proposing marriage. Its not the way that I imagine young Portugeese people behave today- and seems Quixotic (literally). This is a Quixote levelling his lance at lampposts and dancing through the night. All the way through the film his actions have a naive literalness which is charming and uncanny at the same time. He tells a prose tale in poetry to the woman on the train and there must be a suggestion, there was at the bottom of my mind, that he told her it to seduce her. The whole tale may be an invention- a game itself.

But if it is, it is not very appealing. This is the girl seen through the window, through curtains (a motif) if ever there was one for the inability of human minds to connect. If he sees nothing of her then equally he reveals nothing of himself. How is a girl to marry someone she doesn't know? He doesn't appear worried by that question. There are other baroque moments- a poem is read out about the dangers of connection at a private party, friends cause unhappiness- if they do then our hero is a survivor. The epicureanism of the poem though contrasts with the spirituality of the actor. One thinks here of spirituality as a means of inflicting suffering- Jean Louis employed it in My Night at Maud's and our accountant does so here too. When he and the girl are out together, he speaks for her, first and unabashed: given that he doesn't know what she likes he doesn't have to take it into account. She is an image in his head: this he says is love, pure and unadulterated by reality. If nothing else the film is a cutting argument for cohabitation as mature and moral before marriage.

The film is eccentric, no question about that, so is its lead character. But the girl- well she may have an eccentricity by the end, I'll leave you to judge. What is eccentric about her is that she isn't eccentric in the narrator's eyes: women who only stand in windows with fans don't exist. The fact that our Quixote cannot unravel the fact that she is strange because in his eyes that is what she does, doesn't get her and therefore doesn't understand that her anodyneness is eccentricity. The film undermines sexism but it also undermines any posture which assumes that human's aren't individuals, aren't eccentric. Upon the eccentricities of the blonde haired girl, our hero wrecks his family ambitions- that seems, far from unfinished or slight, an incredibly profound and important conclusion to an interesting film. Its a conclusion that, note to some modern film makers, only took 63 minutes to get across.

I promised another installment on Henry Chadwick's Augustine. The book is an educational tool: at least it was for me. I know very little about Augustine save for by acquaintance from the City of God and reading Chadwick has been a way of widening what I know. Chadwick shows us though that Augustine would have disagreed with me. Augustine did not beleive in the education that I think Chadwick has given me: instruction by a teacher in truths that otherwise I would have had to discover by myself with increasing labour. That whole idea of truth as something to discover and to consider was something that Augustine disagreed with. Truth and knowledge were not for him coextensive concepts. Rather he argued that any teacher was insignificant. A teacher merely drew out of his pupils what God had already placed therein. Rather than language, it was 'an inner experience of a sharing of minds' (Chadwick Augustine 46) that prompted development, this inner experience was performed in the light of and by means of faith. Augustine's Christianity was founded on the postulate that the only central truths were religious.

This leads on to a further surprising reflection on Augustine's life. No matter where he was, whether as a pagan intellectual, a Christian intellectual or a Bishop, Augustine was first and foremost a monk. In Italy when he arrived there he set up a community with his friend Alypius and others who reflected upon Manichean and later Platonic philosophy. After he converted to Christianity he kept the community going, though now his mother Monica joined it. When he returned to Africa, so did the community: the return might be seen, and Chadwick describes it as, a resignation in order to reflect. When he was appointed to the bishopric, reluctantly, he immediatly turned the Bishop's house in Hippo into a monastery where all the clergy in the neighbourhood came to live a 'quasi monastic' life (Chadwick Augustine 66). These monasteries were places in which men could refine each other's faith and each other's virtue. The centrality of monasticism to Augustine's thinking ressembles the centrality of education to his thinking and flows from the same source: Augustine was concerned, as a serious thinker, with how thoughts were produced and where they came from. He was also concerned, as a serious Christian, with how faith might progress and be reinforced. The answer to both questions came in a monastic form.

What before Chadwick I had not got was this central aspect of Augustine's experience. When reading texts by him and when understanding his role in influencing later Christianity, its key that we recognise that the bishop of Hippo was not modern. He did not believe that truths were located out there and could be found. Rather the central truths, the only important truths were located within the created creature and lay in his own special insight that he had been created. This meant that a creature should spend his time with other creatures who had the same insight, breeding that community of insight that would further faith. Hence Augustine believed in monasteries which would unite the faithful, hence his sense of the importance of that vocation and hence his description of Christians as a parallel society in the world. It is important to recognise.

There are many other aspects of Chadwick's book that this two part comment hasn't really touched; if it is inadequate in part it is because I ran out of time last week and am writing cold this week. But I do reccomend you read it.