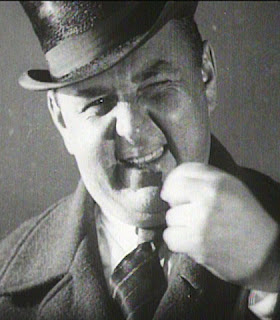 What is the worth of propaganda films to a modern critic or thinker? That thought occurred to me as I watched Sergei Eisenstein's Strike at the British Film Institute last week. Strike is a pretty straightforward propaganda film. Released in 1925, the film chronicles events in an unknown factory. A worker is unjustly accused of stealing a tool from the factory. The bosses believe he has done the deed and sack him but the worker has no other place to work and so commits suicide. His suicide becomes the spark which sets off a general conflagration, as his colleagues decide that their response to the suicide is to strike. The workers walk out of the factory and submit demands to the management for satisfactory hours and rates of pay and conditions. The managers laugh at their impertinence. Assisted by shareholders they gather the local cossacks who ride back into the mass of the workers, massacring those who resist and arresting the ring leaders. Eisentein leaves us in no doubt what we are supposed to think about the film, as at the end one of the ringleaders turns to the camera, in handcuffs, and exhorts us to fight for proletarian freedom and remember the sufferings of the martyrs that went before us.

Eisenstein's film is most definitely propaganda. The bosses are routinely portrayed as fat, old and ugly. They and their spies spend most of the film laughing and grimacing (displaying crooked teeth). The spies who work for them are compared to animals- an owl, a monkey, a bulldog. These animalistic references visually indicate the bestiality of the spies. They use criminals to infiltrate the crowd: at one point the titles show us that one of the spies Monkey asks for anyone without scruples to join his mission to bring down the strike. These guys are bad and they are meant to be bad. Contrast this with the workers. They can do no wrong in Eisenstien's vision of the world. They are lean and muscled. They do not seem unjust or malicious in what they do and they defend their own with a fierce determination. Eisenstein's vision includes no greys only black and white. This makes the film a poor description of a real strike- but it makes it interesting for two other reasons: the first as a historical document and the second as a document within the history of cinema.

One of the things you will notice as a western viewer when you watch Strike is that there are no characters. There are no real defined individauls on the workers' side of the dispute. What Eisenstein is portraying is a social movement rather than individuals, what he is trying to show is the force of that movement as it opens up Russia to opportunity for all. Class power not individual charisma is the engine of history within the film. Its important to note though that class power is also what keeps the proletariate down- not the individuals. The individuals whether the bosses or the spies are repugnant but its their possession of agency, their ability to shape a response using force which allows them to express that repugnancy. So the bosses are compared in a stunning sequence of montage to farmers slaughtering cows- the relationship they envisage with the worker is the same as the relationship that the farmer envisages to his livestock. Others have argued that the scene in which the bosses recruit the lumpen-proletariate is a moment at which awkward aesthetical values shatter the propaganda of the film: I disagree. What Eisenstein shows us is that the bosses and the criminals have the same interests at heart: furthermore he establishes through their alliance the fundemental respectability of the proletariate. Its important to bear these conflicts in mind when analysing the film: Eisenstein is portrying both the brotherly love of the proletariate and the hatred by the Bourgeouise of their independence. Capitalism in this view reduces the proletariate to animals being gutted and creates the exploiters who do this to them.

However Eisenstein's film is also interesting in rejecting the notion of leadership- there are no leaders here. There is a bolshevik group- in the sense that there are workers who discover that striking is good before their fellows do and there is organisation, the workers reject the stagy criminals- but there is no leadership. When compared to his later films (Alexander Nevsky and Ivan the Terrible) there is much less stress on the role of the leader in leading his people to the promised land: that is interesting, not so much for indicating where the communist revolution was (Leninism was totalitarian and unpleasant) but for indicating that you could still think in these terms in 1925. The evolution from the earlier to the later films of Eisenstein is an evolution in his own thinking but also in the official thinking of the Soviet Union from the 20s to the 40s: an evolution which perhaps indicates the way in which the revolution changed. Eisenstein could still envisage the revolution as not needing protecting or guiding (eventually) by a leader or a party in 1925: by 1940 that vision of the revolution was impossible.

These are mere thoughts about the film and I have left out the technical innovations (particularly in montage) that the film made. I'd reccomend a much superior review of Eisentein's entire works here. What I do think that Strike shows us though is how interesting a propaganda film made by a vile regime can be for understanding the ideology of that regime. Strike has fantastic images which stay in the mind but ultimately its also a serious film making a point: there is no way that any of us will agree with that point, but its worth watching just to understand how the point was made.

Much as it may look like it- I have not gone away. The last month or so has been a rather tiresome time at work because I have been travelling a lot and that's reduced the time I've had to spend with my computer and I just haven't felt inspiration recently. One of the things I find about blogging is that I need an idea to animate a piece- it happens every so often that you read a book or see a film which sparks in you an idea- sometimes though you can feel you are stretching your material or are unsure of what you want to say. M.R. James in his ghost stories once wrote an article about unfinished stories- unfinished ideas that he had had- I'd like to borrow his concept- these are posts which are lurking in my subconscious as I write this piece. They may appear one day- they may never appear- but they are things I have started writing since April and haven't finished.

Religion and Realism: I am currently in the midst of the Brothers Karamazov. In the book at one point the narrator notes that Alyosha the religious one of the three brothers is the supreme realist. It is an interesting idea I think, particularly given that since Dosteovsky wrote the world has become more and more convinced that religion is separate from the natural world we live in. I think what he was trying to get at was that for Alyosha and for most premodern religious people, religion permeated their everyday perception of events and was not separate from it. This is true probably of many modern religious people and I think it marks out the fallacy of implying that religion is about faith or dreams or the supernatural, it is something that one perceives.

Burnt by the Sun: this film I was shown by a friend of mine over Easter- actually on the Royal Wedding weekend (which I avoided by going to Normandy). Its a very sad examination of Stalinism and I found it incredibly tragic- the kind of film that you cry over. I think its so powerful because it shows you ordinary lives effected by Stalin: the most pathetic character is a little girl who is sweet and curious and naive but over whom hangs a threat that she does not understand. It also perfectly gets who faced danger in Stalin's Russia- the Revolution really did eat its Children.

Hamlet: over Easter I went to the National Theatre's production of Hamlet. Its not a play I know well- I did Othello and Twelfth Night at School- but it was an amazing performance and really made me think both positively and negatively about life itself. I couldn't think of how to say anything new or interesting about Hamlet but I found it a very powerful experience- I'm not sure that this was an idea for an article or simply a platitude in search of a home!

Bloodlands: Tim Snyder's book is one I've been trying to review for ages but have never quite found the key to unlock it. Its about one of the most terrifying periods and places in history- Poland, Belorrussia and Ukraine from 1932 to 1945. Uncountable numbers of people were killed by the Stalinist and Nazi regimes in that period. What Snyder gives you is both a new reference point for the killings- more from starvation and 'low tech' murder than from gassing- and a new grasp of their horror for individual Jews, Poles and Ukrainians- but also a sense of how these two barbaric tyrannies squared off against each other for being the land based rival to the sea based atlantic imperiums to their west. Its a gruesome story and Snyder brings out elements that I had never understood. It is all the more powerful because for Snyder the individaul deaths are deaths of individuals- fathers, mothers, sisters, brothers. I find this one hard to write because reading it was difficult and writing about it would be worse: that Snyder and others can is something I admire. Thinking about Stalin or Hitler reduces me to depression!

These are just some of the thoughts which haven't quite made it out there over the last month- I apologise for the rambling nature of this post but I wanted to get something down on them all. Thoughts will flee and be replaced by others- what I hope is that some day all of these turn into articles: if not then I hope they can grow in the minds of others!